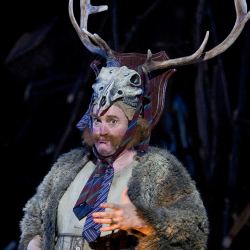 Vaughan Williams wrote the most glorious orchestral music but is less well known for his operatic work. Sir John In Love, based on Shakespeare’s Merry Wives of Windsor, is far from Verdi’s classic Falstaff – but none the worse for that. This is an altogether lighter work, which after a slow first act develops into a ravishingly beautiful score of lush romanticism, creating a magical atmosphere that is greatly enhanced by a delightfully imaginative production.

First performed in 1946 and not seen in the UK since 1958, this new production is long overdue. Oleg Caetani returns to conduct for the first time since his debut with Khovanshchina in 2003, and a cast of former ENO principals and guest artists throw themselves wholeheartedly into the spirit of fun conjured up by director Ian Judge.

The magic is supplied by his collaborators in set design (John Gunter) and costumes (Tim Goodchild). Against a backdrop of a green hill topped by the unmistakable outline of Windsor Castle, two movable 3D skeletons of timber-framed houses provide constantly changing and evocative sets for the action. Are they Elizabethan or Edwardian mock-Tudor? They suggest both, and cleverly link Shakespeare’s England and the suburban sensibilities of this setting, updated to the Edwardian era of Vaughan Williams’ youth.

It’s a good thing that the sets are so engaging because the first act is frankly a muddle: a host of incidental characters causing a great amount of confusion. This is down to Vaughan Williams, however, not the production. While much of the music hints of the glories to come it is never allowed to develop. Although there can be few people who have actually seen this opera performed many may be familiar with the suite of songs from it, In Windsor Forest. One of the lovliest is for Fenton, the love interest, but his first entry singing Have you seen but the white lily grow is almost thrown away through its choppy pace.

But all is redeemed when Act II opens, an exquisite overture at last allowing the lyrical romanticism free rein. The pace never lets up after this, one delightful tableau after another culminating in the literally fabulous scene at Herne’s Oak deep in the forest with the inhabitants of Windsor, masquerading as fairies and goblins, conspiring to give Sir John his come-uppance.

The story you know. The ageing Sir John still has a wicked eye for the ladies but is undone when he targets two friends – the Mistresses Ford and Page – and unwisely sends them identical love-letters. Meanwhile three suitors vie for the hand of Mistress Page’s daughter Anne: two comic characters favoured by her parents and Fenton, her real love, who of course is ultimately successful.

Andrew Shore as Sir John is as good as one would expect from this seasoned singer and consummate comic actor: gross, reprehensible but ultimately hugely sympathetic in his final humiliation. Jean Rigby as Mistress Ford looks respectable but rogueish as she prepares to entice Sir John with her rendition of Greensleeves; Marie McLaughlin is in fine voice as Mistress Page.

The young lovers are Sarah Fox making her ENO debut as Anne Page – very sweetly voiced – and Andrew Kennedy as Fenton, who didn’t seem to have a lot of voice in Act I but impressed more when the music allowed him to expand his phrases.

That seasoned trooper Sally Burgess made the most of Mistress Quickly and there were fine cameos from Iain Paterson as a Welsh Parson and Nicholas Folwell as the host of the Garter Inn. Of Anne’s suitors, Robert Tear had the oddly unsatisfactory role of Dr Caius, supposedly a French physician but who sounded more Flemish, while Christopher Gillet was a splendidly silly young man as Slender.

Oleg Caetani brings out the best in this lovely score, which coupled with the visual magic of the final scenes leaves one delighted, exhilarated and wanting more. It may be silly, and one could do without the bucolic accents (thank goodness for the surtitles), but this is one operatic soap opera that deserves to pack them in.