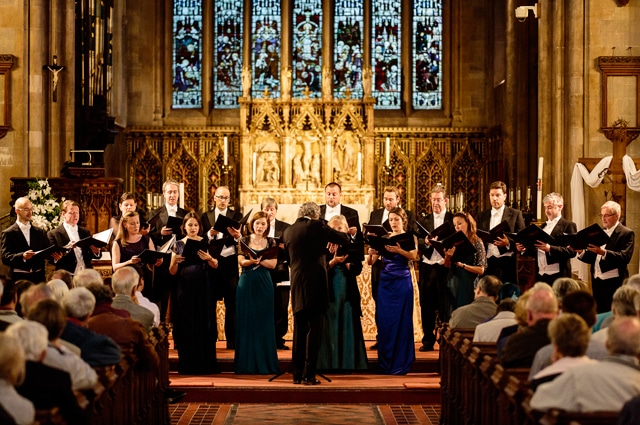 The acoustic of Kings Place Hall One is both springy and unforgivingly analytical, and it’s arguable that a larger, stone building would have been a more fitting setting for the choral repertoire of The Sixteen’s Gems of the Italian and Portuguese Baroque concert on Friday night. But the choir, under their director Harry Christophers, took it all in their stride, producing throughout a deliciously warm, full sound that contained the tiniest hint of vibrato – enough to add a rich colour that made up for the starkness of the surroundings. Indeed, the concert was a model of what choral singing should be – a happy medium between the regimented asceticism of, say King’s College chapel choir, and the over-ripe unblended tone of The BBC Singers.

The repertoire, too, was a rare delight. Church music of the late-17th/early 18th centuries isn’t often performed, and it is a novel combination of some of the stile antico of 16th-century polyphony with the more high-baroque mannerisms of stretto, imitation and the generous use of suspensions to create tension and release; it is generally unaccompanied, but occasionally employs a small continuo group – consisting, on Friday night, of an organ (Alastair Ross), a theorbo (David Miller) and a harp (Frances Kelly).

Antonio Lotti’s eight-part Crucifixus – the most well-known of the pieces – opened the concert, and was echoed at the opening of the second half by Antonio Caldara’s sixteen-part setting of the same text; both of them were performed immaculately under Christophers’ expressive direction (he is very much a man of gesture and body-movement, both of which translate exactly into the music that is produced).

The Portuguese composer Diogo Melgás is relatively unknown; unjustifiably so, as the two works performed – settings of the Good Friday Reproaches (Popule meus) and the Maundy Thursday section of The Lamentations of Jeremiah – were magnificent. The largely homophonic texture of the first piece was layered with yearning suspensions, and the contrast between the longer legato lines and the short, almost-staccato phrases of the second piece was satisfyingly brought out. Melgás’s teacher, João Rebelo, was represented by a short setting of Panis angelicus in which the vocal lines gradually built into an overwhelming tension, eventually finding harmonic release.

Domenico Scarlatti is best known for his keyboard pieces written in Portugal and Spain, but his early Italian choral works are often overlooked. His delightful 1702 soprano-verse/chorus motet Iste Confessor featured in the first half, and most of the second half was taken up with his 1714 Stabat Mater, a skilfully realised tour of baroque tropes. Performances of this work can sometimes be over-choral and somewhat dry, but Christophers revelled in the contrasts of the verses, using the choir (as chorus, semi-chorus and soloists) and superbly played continuo instruments to point up the ornate imagery of the poem: the fulfilment of Simeon’s prophecy to Mary in pertransivit gladius was full and radiant; the Quis est homo was presented as rapid, tumbling interrogations; the pile-up of suspension on suspension in Sancta Mater was almost unbearably lush; the pyrotechnic quaver runs of Inflammatus were taken at breakneck speed, and deftly handled by the two perfectly matched soloists. The whole finished with Scarlatti’s dazzling Amen, presented in a display of baroque choral perfection by true masters of the vocal art.