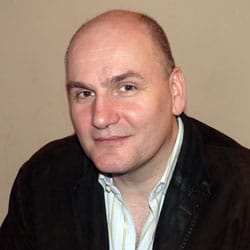 It’s a very long journey to make in just one week, from the world premiere of Imago at Glyndebourne to a performance of Bach’s most intimate work, so it was remarkable that the Aurora Orchestra under Nicholas Collon managed to provide such a finely shaped and excitingly played account of the St John Passion. They were naturally aided in this by having the ‘A team’ in terms of both soloists and choir, and the perfect venue in the exquisite jewel box that is Hall One at Kings Place.

If the Matthew is the Passion of grand drama, then the John is the Passion of love, and Nicolas Collon brought out this feature in virtually every bar. The choir of Clare College has long been a personal favourite, and this performance did not disappoint; Collon was Organ Scholar at Clare, so he is steeped in the choir’s tradition, and Graham Ross’ outstanding training of these young singers produced a sound which it was hard to believe was coming from a group of students. Whether frankly declamatory, as in ‘Dein Will gescheh’ or deeply devotional as in ‘O grosse Lieb,’ this was choral singing which it would be difficult to equal anywhere.

The same was true of much of the solo work. John Mark Ainsley is the ‘go-to’ tenor for the Evangelist, and although his no-holds-barred willingness to sacrifice the odd stretch of pure tonal beauty in pursuit of expressiveness does not suit everyone, he tells the story as few others can. His tenderness at such moments as ‘Als nun Jesus wusste alles, was ihm begegnen sollte’ (Since Jesus knew all that was to befall him) and ‘Und neiget das Haupt und verschied’ (And he bowed his head, and died) is balanced by the almost savage drama of ‘Da nahm Pilatus Jesum und geisselte ihn’ (Then Pilate took Jesus and scourged him.)

Iestyn Davies continues to invite superlatives; it has been such a joy to see the growth of his artistry over the past few years. I have not heard a more moving, expressive or melliflouous ‘Es ist vollbracht’ since Andreas Scholl – high praise indeed. Andrew Tortise was a little too emphatic in his first aria, but by ‘Mein Herz, in dem die ganze Welt’ he had settled down to reveal confident style and supple phrasing. David Stout sang the glorious bass arias with tender eloquence; ‘Mein teurer Heiland’ was a high point of the evening. Roland Wood’s Christus was stalwart rather than touching, and although Malin Christensson gave an engaging account of ‘Ich folge dir gleichfalls,’ with every word finely pointed, her voice did not quite do what she wanted it to in’Zerfliesse, mein Herze.’

The continuo playing was superb, with especially fine work from Richard Tunnicliffe and Oliver Coates, and Thomas Gould provided not only committed leadership but lovely playing, especially in ‘Betrachte, meine Seele.’  One of the greatest of all musical works, performed by an outstanding team of mostly very young singers and players, in a beautiful modern concert hall, ecstatically received by a capacity audience – no one could ask for more.

Further details of Wigmore Hall concerts can be found at kingsplace.co.uk