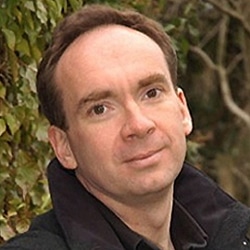 Bach’s St Matthew Passion sometimes seems to be the Scottish Play of great musical works – I have reviewed performances where only the Evangelist survived from the original cast, and where both bass and alto soloists were taken ill, but none quite so dramatic as today’s. After the soprano Carolyn Sampson had had to withdraw at the last moment, one might have felt safe, but it was not to be: during ‘O Haupt voll Blut und Wunden‘ James Gilchrist, who had been singing a wonderfully dramatic, fluent Evangelist, signalled to the tenor soloist that it would be necessary for him to take over. The younger man looked terrified, as well he might: Evangelist and conductor departed the platform, and audience and the rest of those onstage were left to speculate. Would the soloist be able to take over? Was there a tenor in the house? In the end, it was agreed that it would not be possible to perform any more recitatives, though the performance would proceed with the chorales and bass aria intact. It was a tribute to all concerned that we did not feel deprived.

The Bach Choir’s annual Eastertide performance of this work is a well known quantity: if you mostly attend what one bass described to me as that sort of Messiah you might feel a bit bewildered by the vast massed choirs, the lovely Ripieno Chorus of cream-fed gels alone outnumbering the forces of a group such as Polyphony. However, one takes it in one’s stride: the Bach Choir makes a fabulously rich sound, and the enhanced Florilegium plays supportively if not always inspirationally, especially in the case of the obbligati to the alto and bass solos.

The singers were a curiously mixed bunch, with Iestyn Davies and James Gilchrist clearly refugees from that sort of Bach, Helen Jane Howells, Roderick Williams and Benjamin Hulett much more in the style of the big bow-wow performance, and Jeremy White not exactly anywhere: if you’re used to someone like Peter Harvey as Christus, youll find Mr White’s tone dry and his manner uninvolving. Personally speaking, even though I’m firmly an atheist I like my Jesus to make me feel sorry for him, and this was not easy here.

Iestyn Davies sang his arias with his now-customary understated emotion, ease of delivery and restrained anguish; ‘Erbarme Dich’ was especially affecting. James Gilchrist is not as vocally agile as some other Evangelists, but he gives the role his all, not flinching from making a less than beautiful sound when the drama requires it. Roderick Williams’ voice is light and at times poetically used, although he does not have quite the gravitas or the low notes I’d like to hear in ‘Mache dich, mein Herz, rein’. Helen Howells stood in for Carolyn Sampson with impressive poise, and Benjamin Hulett showed much promise with tenor arias sung with immaculate diction and clear projection.

As regular readers might expect, I loathe Bach in English: no one can convince me that ‘Take, eat, this is my Body’ and ‘Gladly would I leave Him’ never have the same verbal or musical force as ‘Nehmet, esset, das is mein Leib’ and ‘Gerne will ich mich bequemen’. However, my dislike isn’t enough to prevent me from enjoying some wonderful singing and playing under David Hill’s enthusiastic direction, and experiencing yet again this greatest of all choral works what a great story, and how convincingly Bach tells it, in any language.