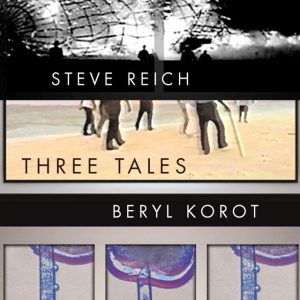 Three Tales is a collaboration between contemporary composer Steve Reich and his wife, the videographer Beryl Korot. Together they have produced a powerful, poignant and sometimes amusing portrait of three technological events from the 20th Century – the Hindenburg zeppelin, the atomic bomb tests at Bikini Atoll and the small matter of cloning, addressed through Dolly the Sheep.

Cloning is a word that applies well to Reich’s minimalist style of music. In his earlier work Different Trains, for string quartet and tape, he showed himself to be a master of mirroring human speech in music, somehow bringing out the pitches of an everyday conversation. That technique is again at work here, with an excellent performance from Reich’s own instrumental ensemble and the vocal group Synergy, enhanced by Korot’s striking visuals.

The Tales are presented chronologically on DVD, so to begin with we see images of the construction of the German airship, with Reich rather aptly converting a theme from Wagner’s Ring for his own use. There are some surprisingly moving sequences of the craft passing over what I took to be Cologne cathedral, before the disastrous explosion occurs – explained in the comprehensive liner notes as the first disaster to be caught on film.

Bikini is the central slow movement of the work, and builds tension continually as the countdown to the bomb’s detonation runs from 10 to zero, holding the viewer brilliantly. Korot’s subtle doctoring of the original film is interspersed with black and white text, all robotically in time to the music, and the film continues in black and white until the moment of the explosion – a sudden rush of yellow and orange. We don’t see the epicentre, but feel its force through the destruction of the island’s palm trees.

After this Dolly provides some comical light relief, especially with a feminine robot that asks as suggestively as a robot can, “Would you like to be cloned?” There are a good many scientific musings, cut and spliced in Reich’s speech imitation, and the scary observation that if we create a species smarter than ourselves, the prospects could be dim. The tale ends with human and robot interacting, a surprisingly touching moment.

Nonesuch have issued this as a two disc set – one with visuals and extras and one with the music only, and it’s interesting to note that even without the film the music carries a punch. I wouldn’t put it right up there with Reich’s accomplished scores such as Variations or Six Pianos, but I would say Three Tales carries the greatest impact of any of his works, and asks the most pertinent questions of human nature.