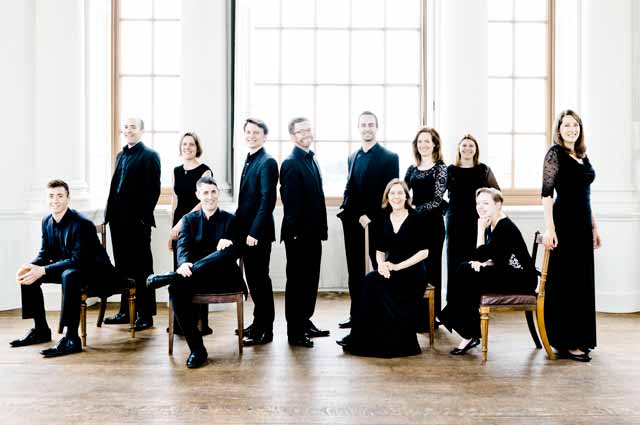 Of John Dowland’s seven instrumental Lachrimae Pavans, only one was given words by the composer, when he subsequently re-set it as the lute-song Flow my tears. Stile Antico, for a thoughtfully constructed topical concert, ‘Songs of Longing and Exile’ – a portrayal of the grief and distress felt by those whose lives have been affected by the turmoil in the Middle East and elsewhere – commissioned the poet Peter Oswald to provide text for the remaining six, based on interviews of Syrian and Somalian refugees arriving in Plymouth. The concert also featured Robert White’s five-part setting of Lamentations of Jeremiah – the mourning endured centuries earlier by the people of Jerusalem. All these were interspersed with works for oud played by the Syrian virtuoso Rihab Azar, among which was her own composition Questions, performed at the memorial service for the victims of the Grenfell Tower fire. The final work of the evening was Giles Swayne’s On Bodrum Beach, which, in a chillingly matter-of-fact setting for twelve voices and oud, adapts Matthew Arnold’s On Dover Beach to the 2015 tragedy in which a Syrian woman and two children were drowned attempting to cross from Bodrum to Kos by boat.

Robert White’s Lamentations is home territory for Stile Antico, and, as would be expected, the performance was flawless. Blend and dynamic were beautifully controlled to bring to the fore White’s elegant polyphonic writing and word-painting: the well-judged placement of the staggered entries on ‘Deposita’, for example, the marcato of ‘de excelso’, or the contrasts in volume for the various repetitions of ‘Jerusalem’ in the final verses.

It is surprising what a difference the setting of Dowland’s pavans for voices makes: the lines have more weight to them, such that the composer’s delectable harmonies and false relations (particularly evident in Lachrimae antiquae and Lachrimae amantis) are really leaned into. The group gave them an excellent performance, again, controlling dynamic, speed and timbre to make the most of Oswald’s words; in Lachrimae tristes, for example, the words ‘… a new whisper, ghost-strange …’ were given extra sibilance. Oswald’s text, although, at first, sounding anachronistic (phrases like ‘being a journalist’ sit oddly with Dowland’s music) grew on one. The poignancy of the stories shone through, and deft references to other exiles (such as ‘swing low sweet bus’) added further layers to the texture. The angry, racist accusations of an 18th-century London migrant to Cornwall used for Lachrimae amantis gave us a reminder that grief comes not only from the process of exile, but from the reception that refugees often receive.

Rihab Azar’s nuanced oud performances not only provided contrast to the vocal material, but also mirrored some of the polyphonic techniques in a different idiom. The repeated fast passages of Farid-al-Atrash’s Lahn-al-Khulud, and the morphed repeats of a simple melodic passage, returning to a bass drone, of Azar/Wiegold’s Love far away were refreshingly different in texture to the solid complexity of the White; a similar contrast was achieved with the Dowland in the sad-and-angry strummed passages of Questions. The classical Arabic Muwashah Badat Min al-Khidr makes generous use of the quarter-tones of the oud, and this, together with the string-bending technique present in all of the pieces injected moments of piquancy similar to the false relations in the polyphonic items.

Giles Swayne is uniquely suited to portray musically the poignancy of the 2015 Syrian refugee tragedy. His hallmark use of uncomfortable pitch proximities in On Dover Beach was to the fore, and the despairing cry of a twelve-note cluster on the line ‘There were twelve of us’ made for a truly heart-rending summation of the evening’s theme.