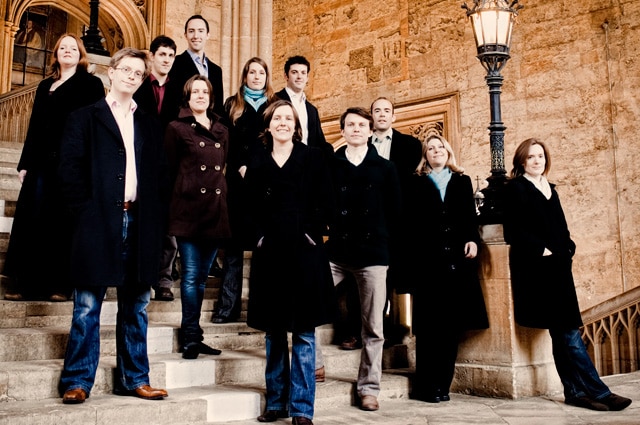 Stile Antico’s concert ‘Divine Consolations’ on Tuesday evening contained a selection of choral music on a funerary theme, from both the Catholic and Protestant traditions.

The larger works in the programme were, in a departure from Stile Antico’s usual specialist period, two lengthier Baroque Protestant pieces. The first of these (accompanied by a chamber organ, a theorbo and a violone, ably and sensitively played by Oliver-John Ruthven, James Akers and Kate Aldridge) was a performance of Heinrich Schütz’ seldom-heard Musicalische Exequien. Although stylistically a couple of centuries earlier, the piece is often compared to Brahms’ Ein Deutsches Requiem, as it is a musical setting of biblical texts (including some of the same ones used by Brahms) in place of the Catholic rite, but acting in the same capacity – in this case as funeral music for Prince Heinrich von Reuß.

The Exequien consists of three sections; a lengthy initial choral concerto serving as the bulk of the funeral ‘mass’ – in which alternating sections are sung by full choir, semi-chorus, solos, duets and trios; a polychoral motet, Herr, wenn ich nur dich habe; and a further polychoral, heavily Venetian-influenced German setting of the Nunc Dimittis.

The polychoral sections were adroitly handled with the choir’s customary beautifully blended sound – even when split into two choirs – but the earlier concerto was a little more uneven. One of Stile Antico’s many strong points is its choice of singers; each of the several voices on a part always brings something to the party, such that the totality of, for example, a soprano line, is a mixture of complementary timbres blended to create a unique set of harmonics. When these voices are separated out so that individual singers from each part perform solos, or join with solo voices from other parts, this inevitably invites comparison; none of the combinations was less than good in these more exposed sections, but some were more successful than others – the alto for ‘Gehe hin …’, for example, or the male singers for ‘wenn mir gleich …’, and the two basses for ‘Unser Leben …’ were special indeed.

The second large Protestant work was an account of the longest of Bach’s motets, Jesu meine Freude. Although some performances of the work are sung unaccompanied, on Tuesday the choir was joined by a basso continuo of violone and organ. The motets are arguably Bach at his most seriously devout, and, lacking the instrumental variations in texture of many of the cantatas, for example, can become (in some performances, at least) somewhat unrelenting slices of choral counterpoint. This was far from the case on Tuesday, however, as Stile Antico presented the audience with a musical garment of contrasting colours and textures through artful use of dynamics, phrasing and punctuation, whose highlights included the expressively staccato ‘Trotz dem alten Drachen …’ and the calm insistence of the chorale melody by female voices in ‘Gute Nacht …’.