by Barry Creasy
published: 21 May 2017 in Opera and Classical Reviews
Tweet 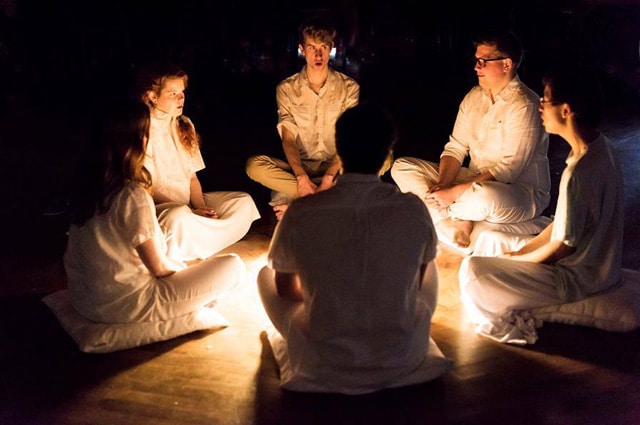 Last weekend, The Platform in Southwark hosted a ‘Crossmodalist Cabaret’, a series of concerts and events highlighting the emerging concept of crossmodalism – the way our senses act in synergy, such that what we view may, for example, affect the way we taste or hear. Included in the mix was a performance of Karlheinz Stockhausen’s work for six amplified voices, Stimmung.

Musically, the piece explores the relationship between voice production and the physics of sung overtones, and how these are affected by the text (or, more specifically, the vowel) sung. It is essentially one chord sung for 51 ‘bars’ or ‘movements’ of indeterminate length (although not all of its notes are always present); attached to each ‘bar’ is a repeated syllabic model –the number of repetitions and order of models to be decided by the performers; the syllables may be religious references, days of the week, random words such as ‘phoenix’, or, mostly, rhythmic groups of ‘nonsense’ sounds. Occasionally spoken into the mix are ‘magic names’ (the names of deities from different cultures) and erotic poetry, each of which modify the syllabic content, like pebbles forming ripples in a pool. Stockhausen essentially creates a detailed structure (even specifying the size of the cushions the singers should sit on!) within which the singers have freedom to vary the material.

The group gave a first-rate account, and their mastery of overtone singing was generally very good. They opted for a largely low-volume performance (in some versions, the more busy models – where everyone is singing – can become enjoyably boisterous, and this didn’t happen here), but it contained some satisfying showcase moments for individual performers (Oliver Clarke’s splendidly theatrical declamation of the poem Meine Hände, or Benedict Collins Rice’s exasperated ‘come on’ being examples), and a liberal seasoning of vivacity and wit.

One small criticism might be of the group’s use of magic names. There is a long list of these, to be used ad libitum in some of the models. The Ensemble opted for a generous scattering of them, often using two in a model, but quite often in rapid succession, so that the effect of the first name wasn’t always given time to take hold of the syllabic content before the second name arrived. This is a minor quibble, though, and some of the effects created were aesthetically pleasing – the euphonious combination of Indra and Venus, for example, or the witty consequences of the mischievous pairing of Wakan Tanka and Jesus.

The major problem, however, was of the control of the space. Turning the room into a dark, comfortable, meditative environment, where listeners could lie or sit on cushions was an excellent idea, but, unfortunately, entry and exit were not policed, and the mood was frequently disturbed by arrivals and departures picking their way across bodies in the dark. There have been public-space performances of the piece where listeners come and go – in the foyer of The British Library, for example, or at the World Fair in Osaka – but having opted for a milieu that was more tranquil, the organisers should have kept it that way.

The Façade Ensemble MP3s or CDs

The Façade Ensemble on Spotify