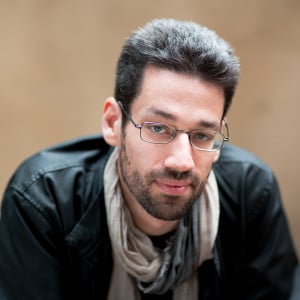 This concert’s centrepiece, Beethoven’s Piano Concerto No 4, just wasn’t written with parity in mind. And Jonathan Biss – who describes just how Beethoven toys with the orchestra from the piano bench (see Q&A below) – harried the brave Stuttgart Radio Symphony Orchestra (SRSO) and almost drove them to breaking point by the end.

Biss neatly rattled off the concerto’s unusual unaccompanied opening and waited to see how the orchestra responded. With nary a ruffled feather, the SRSO’s response was cool, calm and collected. So he prodded again. With fingers twinkling away and pushing the pace, the orchestra appeared to be ducking the fight. And thus, credit should go to their French conductor Stéphane Denève, who kept an impressive grip on his forces, never allowing proceedings to get out of control.

However, the clarity of Biss’ dazzling fingerwork and ever-present sense of enjoyment overshadowed the orchestra’s ranks behind his Steinway. By the third movement, Biss began to ask questions of the orchestra that they couldn’t answer as he increased the pace. With the SRSO in tow – who were busy passing his melody lines around the orchestra and echoing Biss in some style, it must be said – he just kept pushing his rapid fire attack onwards, refusing to be tamed. And while Denève, rightly, kept the orchestra in check, it was a shame they were never truly let loose.

With a sigh of relief the SRSO’s chief tormentor took a bow. Biss disappeared and reappeared to the applause multiple times until a bouquet was produced. Smiling mischievously, he handed it to a female violinist. Down he sat once again and played Schumann’s Einsame Blumen from Waldszenen Op 82 as an encore. Finally, the tables were turned as Biss – finally – sounded much less confident, with a few bum notes thrown in, which could well have delighted members of the orchestra. Finally, they had proof he was fallible.

The SRSO had much less anxiety with the rest of the evening’s programme. Opening with John Adams’ The Chairman Dances, the piece played to the orchestra’s strengths – incredible string tone and bang on percussionists – as they captured the insistent and nagging tone of the foxtrot to great effect. While it could have done with a bit more bass clef menace, the delicate approach and elegant, rounded colours they applied created a Californian vibe placed within a wintery and cool Germanic context.

The strings were, once again, the centre of attention after the interval in Samuel Barber’s warhorse Adagio for Strings as they spun line after gorgeous line of melancholy before heading for the work’s hope-filled resolution. Again, Denève deserves credit for his superb ability to create a zen-like balance across the ranks and proves just why he is a worthy successor to the great Sergiu Celibidache, who previously led the orchestra from 1971 to 1977.

With Biss banished to the wings and the orchestra in full stride, the SRSO closed out the night on a distinctly impressive high. With the help of the SWR Stuttgart Vocalensemble they tackled the tricky Symphony of Psalms by Igor Stravinsky. It was another inspired choice by Denève as he took a brave gamble by banishing his ever-impressive string section to let the wind instruments and percussionists shine. Rising to the challenge, they delivered a stunning and powerful performance of the piece, backed by some fine singing. Here, the wisdom of Denève’s calculated musical balance made sense in keeping every faction in check and letting each element of the haunting piece unfold in Stravinsky’s precise neo-classical order.

While Biss may have stolen the show in under a half an hour, it was the rest of the evening’s work that showed the SRSO to be an impressive force in its own right, with a string sound that most other orchestras should envy.

musicOMH: Beethoven’s Fourth Piano Concerto is unusual for a soloist as it opens with – just you. Are you a fan?

JONATHAN BISS: This piece has long been a special favourite of mine, and the opening is certainly one significant reason why. Beginning a concerto with the piano alone is already quite an extraordinary idea, but what I find even more striking is the utter absence of rhetoric – this opening gesture is personal, vulnerable and, as you say, much more a question than a statement. So the unique atmosphere of this work is established immediately. And then the orchestral response is, if anything, even more remarkable…

OMH: Do you like the way Beethoven uses the soloist to keep deflecting the orchestra and dissolving the climaxes?

JB: Yes, I think the relationship between the piano and the orchestra is another of the great innovations of this work. Even though the piece is written on a grand scale, the piano is very rarely in ‘heroic’ mode: so often it is embroidering the melodic material that the orchestra is playing, and in the slow movement, it makes a profound impression despite rarely rising above a whisper.

OMH: Do you feel that Beethoven uses the piece to create a confrontation of two musical worlds – Baroque v Romantic?

OMH: What does the piece tell you about Beethoven? And do you have a favourite recording?

JB: I always marvel at the way in which such a monumental, large-scale work can be so deeply poetic. Moment to moment, this concerto has an extraordinary intimacy about it, and yet it adds up to something truly Olympian. That is a neat trick! All five of the Beethoven piano concerti are great works, but this one has a philosophical, even spiritual side to it, which is unique. I play this concerto quite often, and thus am frequently working on it. Therefore I try not to listen to recordings of it. It’s not that I’m not interested – quite to the contrary, I’m worried I would be too influenced by what I hear! For better or worse, I try very hard to cultivate my own relationship with a piece of music that I’m playing. I studied with Leon Fleisher, and I grew up with his recording of the concerto with George Szell and the Cleveland Orchestra. I loved it dearly and heard it hundreds of times – but it’s probably been 20 years since I last listened to it.