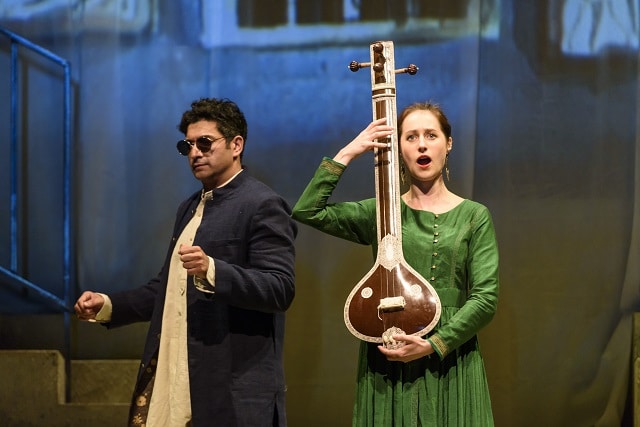 Shankar 100 is a year long series taking place at the Southbank Centre commemorating the centenary of the birth of Ravi Shankar. He may be intrinsically associated with Hindustani classical music, but he did also branch out into other Western musical forms throughout his life. He famously influenced The Beatles, collaborated with violinist Yehudi Menuhin and appeared at legendary 1960s American music festivals like Woodstock and the Monterey Pop Festival. His interest specifically in Western classical music came towards the end of his life, with his only symphony arriving in 2012. He was working on Sukanya, his only opera, at the time of his death in 2015. British conductor and violinist (and long-term Shankar acquaintance) David Murphy helped complete the piece and it received its world premiere in 2017. Murphy was back tonight to conduct the London Philharmonic Orchestra alongside a cast of performers in a semi-staged performance of the opera.

The story centres on Princess Sukanya (played by Susanna Hurrell) who discovers Chyavana (played by Alok Kumar), a bereaved man who has undertaken a centuries-long meditation in a forest (so long that a colony of ants has built a nest around him, obscuring him from view). Intrigued, Sukanya investigates the strange mass by prodding her fan into it, inadvertently blinding the now old man. Sukanya and her father King Sharyaati decide that the only reasonable course of action is for Sukanya to marry the old man to atone for her actions. Naturally. This then triggers the second phase to the story whereby two jealous demigod twins challenge the princess as to why she has married an ageing man instead of a younger, fitter being such as one of them. In short, it’s an enjoyably absurd tale which as a piece of art, maybe predictably, comes with its fair share of ups and downs.

Much talk ahead of the opera focused on the supposed difficulties in reconciling Indian classical music with its Western counterpart, yet this was one element of the opera that worked extremely well. The instruments played by the five Indian musicians lent exotic accents to the surges and flares of the orchestra. The elongated, bending sounds of the sitar gave way to the arresting, robust call of the shehnai while percussive dimensions were forthcoming via the tabla and mridangam. The orchestra highlighted the moments of drama in the piece with boldness and vigour and the varied components were all brought together effectively.

A light-hearted, fantastical tone ran through the early stages. Upon finding her husband-to-be surrounded by swarming insects Sukanya delivered the improbable standout line of “Ants! So tiny and so organised! My father would give anything for such battalions!”. However, the libretto is where most of the piece’s problems lie – too often it stumbled and failed to convince.

The marriage proposal scene unfolded amid a suitably charged musical backdrop, the orchestra and Indian musicians more than providing a musical match for the whirlwind series of events just witnessed. Unfortunately, the start of the second half sees the piece lose its way somewhat as the two lead characters engage in a disengaged examination of the two musical styles present in the opera, not to mention a labouring, superfluous account of Chyavana’s musical experiences as a child. Kumar and Hurrell sing the lines with conviction, urgency and eloquence (as they do throughout the entire concert) but it feels expendable.

Thankfully, things soon get back on track, and Sukanya brushes aside the challenge of the demigod twins to her new marriage to ensure the piece ends on a high note. The impact of the music, quality of the singing and beauty of the choreographed dancing in these later stages have a redeeming effect against some of the earlier silliness. The piece ends with musical worlds being merged amid golden hues as the happy marriage is celebrated, putting the seal on a notable performance of a flawed, slightly uneven opera.