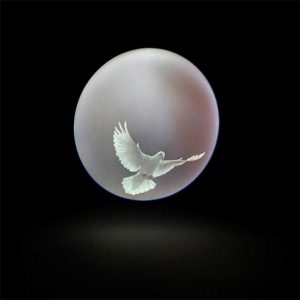 Seemingly, if you want to be taken seriously as a composer of ‘classical’ church music this century, you’ve got to have an O magnum mysterium in your portfolio. Settings of this responsory from the Matins of Christmas Day were popular in the Renaissance, but it was Morten Lauridsen’s 1994 composition that relaunched the craze for it among the ‘Holy Post-Minimalists’, and the likes of Ola Gjeilo, Kevin Memley and Carlo Rütti have all joined in with their contributions to the pile.

The latest unlikely addition to this catalogue is by the rapper, record producer, fashion designer, former presidential candidate, and all-round media phenomenon, Kanye West, whose five compositions for a cappella chorus (including a setting of O magnum) make up The Sunday Service Choir’s latest EP Emmanuel, released on Apple Records on Christmas Day 2020.

Emmanuel seems to be another product of West’s spiritual redirection; he announced his full commitment to Christianity in 2019, and The Sunday Service Choir’s album Jesus is Born of Christmas that year featured a collection of Gospel oriented tracks by him. With Emmanuel, though, the Latin titled tracks and contemporary white Western influenced compositional style, shift the musical focus more in the direction of Roman Catholicism.

The music might best be described as simplistic, but then, West is in good company here, as a deal of ‘classical’ 21st century church music seems to have gone the way of ‘ooh  and aah inspiring chords in a big echoey building’. O magnum itself is very much in this style, creating luminous harmonies through staggered entries – imbuing a feel of spirituality without the need for either an inspired melody or the technical skill of contrapuntal writing. The most ‘pop-y’ (and, arguably, interesting) track on the EP is Gloria, whose almost mediaeval melody is repeated in a series of simple harmonisations to become slightly mesmeric. A couple of the tracks (Requiem and Puer) deploy ostinato effects with wordless melodies in the lower parts, and it’s in Requiem that we get a hint of counterpoint. The title of O Mira Nox suggests it might be a setting of a hitherto obscure responsory from the breviary, but translating it gives it away, and it is, indeed, an a cappella re-harmonisation of Adolphe Adam’s hugely popular O Holy Night.

The Sunday Service Choir makes an excellent job of delivering these pieces, creating a blended and well-controlled tone that’s full of warmth and feeling, clearly stemming from the Gospel mainstays on which the choir was founded. It’s a pleasure to listen to this kind of music being sung in a style that differs from its usual Oxbridge influenced choral delivery; there’s a fresher, more human element to it.

The EP is available for streaming via Spotify and Apple Music.