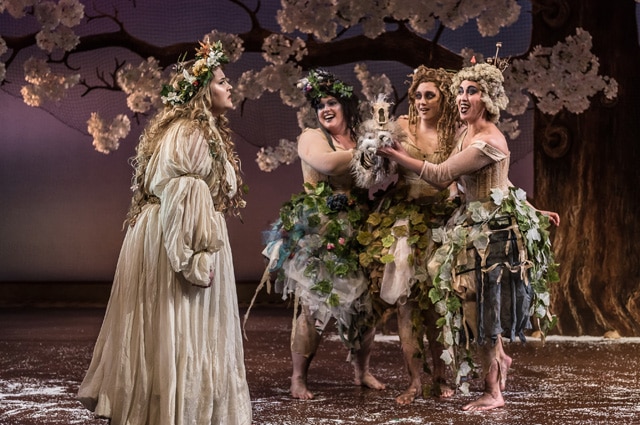 Based on Chaucer’s The Merchant’s Tale, The Tale of Januarie is a new opera by Julian Philips, Head of Composition at the Guildhall School of Music and Drama where the work now enjoys its world premiere. It is an extremely innovative piece which, when combined with the direction of Martin Lloyd-Evans and performances from some exceptionally talented young singers, comes across especially strongly.

The Merchant’s Tale is the story of a wealthy, ageing man, Januarie, who seeks a younger wife and so marries May. She, however, falls for the squire Damyan who is closer to her age, and Januarie, being fearful of competition, quite literally walls her off from everyone so that they can enjoy ‘blissful’ love in peace. Things, however, are complicated when Januarie is blinded after Proserpina takes exception at him seeking to exploit a younger woman, and Damyan manages to copy Januarie’s key, thus enabling him to reach May in the pleasure garden beyond the wall.

Although this version by Philips and librettist Stephen Plaice constitutes an interpretation of The Merchant’s Tale, it is a reasonably faithful one, but the slant placed on several issues and the ending are different. The score, conducted here by Dominic Wheeler, is thoroughly modern and yet seems grounded in the English tradition, while also displaying a far wider range of influences. It frequently conveys a sense of medieval folk music, but some of the chorus sounds seem reminiscent of Britten. In addition, the first appearance of Proserpina’s nymphs seems to recall Rutland Boughton’s ‘How beautiful they are’ from The Immortal Hour, even if the musical comparison is not strictly accurate. At the same time, some of the score feels inspired by Boulez, while Philips also creates steamy, seductive sounds, seemingly reminiscent of Weill, to capture the mood in certain scenes.

It seems clear that Philips, Plaice and Lloyd-Evans worked closely together throughout the process of staging the opera. Their collaborative approach seems to be particularly in evidence in a scene when Damyan tries to sneak into the pleasure garden with his own key but is thwarted by dropping it, the blind Januarie stepping on both it and Damyan’s hand, and then it jamming in the lock. All of these visual effects work so well that, although it would be perfectly possible for a director to examine the score and create them from that, it seems more likely that Phillips, Plaice and Lloyd-Evans discussed at length how the music and words should work with them. 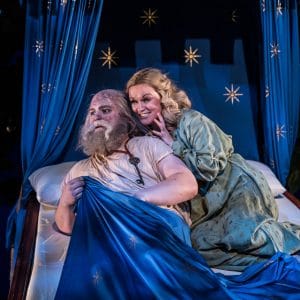 Dick Bird’s set is brilliant, presenting a three-dimensional image of a tree on a two-dimensional, but appropriately shaped, board. Night and day are depicted by having gold and silver balls (the sun and moon) ascend or descend, while the changes of season are denoted by a backdrop changing colour. The tree begins with bare branches but as spring arrives a meshed frame with flowers on it descends in front of it so that it suddenly bears blossom. A similar device is used to see it bear pears in the summer while at different times snow, blossom and leaves fall upon the stage.

This version does not shy away from playing up the bawdy elements of the tale, and it is interesting to see how the Middle English that the performers sing corresponds to the surtitles, which present the equivalent in modern day language. Sometimes, this leads to the written phrase seeming a lot ruder but the words that feature in the Middle English version were probably no less so; they simply sound more ‘acceptable’ to us today because they seem more ‘exotic’. Nevertheless, much as we may laugh at the suggestive contents of the vegetable barrow pushed around by Priapus (who acts as the narrator and is well played by Carl Stone), the strange grunts that emanate from Januarie’s bed and the introduction of a toilet cubicle, we are just as likely to marvel at the quality of the workmanship that has gone into creating these objects. The costumes are also excellent with their style and colours ensuring the crowd scenes look positively Breughel-esque.

In the poem, after all of the shenanigans have played out, Januarie and May stay together while Damyan’s own story is given no real conclusion. The point is that Januarie and May, who represent months and thus seasons, highlight the theme of renewal, while Damyan whose names signifies no such thing fades into obscurity. The opera’s ending is quite different because it adds a Finale beyond the point at which the poem finishes. It is effective, however, because it still makes a point concerning the cycle of the seasons and thus life.

Several of the principal roles are being shared by two performers across the run, but John Findon sings Januarie for all of the performances and proves magnificent in the role as he projects his strong and warm tenor, while showing an excellent penchant for comic timing. Joanna Marie Skillett, seen playing Iolanta here last October, reveals a sensitive yet beautifully developed soprano as May, while Dominic Sedgwick displays a striking baritone as he brings a sense of ease and lightness to some demanding phrases. Elizabeth Skinner reveals a full and sumptuous soprano as Proserpina, and Martin Häßler demonstrates an exceptionally strong and firm baritone as Pluto. Chloë Treharne, Bianca Andrew and Jade Moffat are superb both vocally and dramatically as the nymphs, as are Eduard Mas Bacardit and Michael Vickers as Januarie’s counsellors.