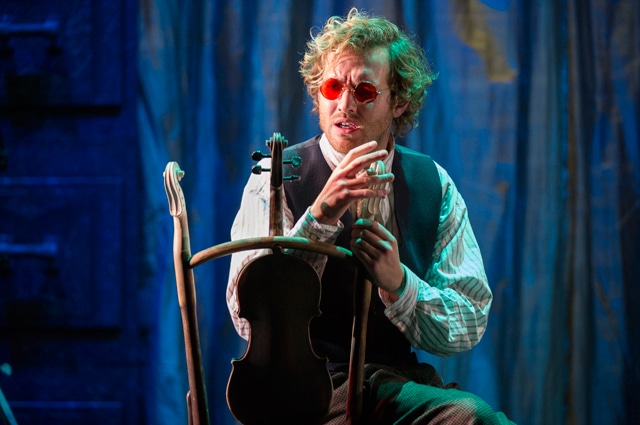 James Bonas’ production of The Tales of Hoffmann for English Touring Opera reveals just how good Regietheater can be when the idea is well thought through. The action is updated to the early twentieth century so that Stella is a star of the silver screen, and this proves an excellent way of showing how she, as essentially a projected image, represents an ideal that Hoffmann could never hope to achieve.

The contrast between reality and fantasy is made all the more acute by setting the first scene in a film studio complete with props and spotlights. This reveals the unglamorous truth that goes behind generating the images of his beloved that Hoffmann watches on screen. It also reveals how Hoffmann’s previous encounters with women constitute good entertainment, with his friends settling down to hear about them as they would to watch a movie.

The room itself is a box-like area covered from floor to ceiling with drawers that can open to reveal eyes in the Olympia scene, or to show faces. This remains the same throughout the drama, which emphasises the synergies between the three central scenarios, and connects these events to Hoffmann’s present. The screen in the initial scene finds a counterpart in the mirror with which Giulietta attempts to steal Hoffmann’s shadow and a board on which scientific diagrams appear in Spalanzani’s laboratory. That this is then wheeled on in the final scene in its torn state reveals how Hoffmann’s dreams have been shattered. Stella now appears not on film but simply behind the frame, while the Muse steps through it to show that she is Hoffmann’s future and reality.

At the same time, the areas for the three central scenes are made to feel substantially different in their proportions by pushing a central section of the back wall forwards to depict Crespel’s house, and backwards to portray Giulietta’s Venice. It is removed altogether in Spalanzani’s laboratory and a curtain put in its place, behind which Olympia first appears. There are also numerous smaller touches, ranging from The Legend of Kleinzach being acted out using Hoffman’s friends, to the typography of the surtitles (the performance is in English though) making them look like captions to be found in silent movies.

Not every idea works. For example, the Doll’s Song is marred by having Olympia portrayed as a skinny puppet covered in lights with Ilona Domnich (who also plays Antonia, Giulietta and Stella) becoming one of its puppeteers as she sings. It is distracting to see this moving in time with the music when we only want to listen to the beautiful soprano solo. Domnich occasionally displaces the puppet to take centre stage, presumably highlighting the fact that Olympia is also Stella, but such an aria does not benefit from these type of distractions. Nevertheless, any weaker moments in this reasonably slick production are soon forgotten in the face of a very strong cast. There is certainly no hint that part of Domnich’s mind is focused on operating the puppet as her voice reveals sweetness, lightness and exquisite precision.

Sam Furness is excellent as Hoffmann, producing a strong and expansive tenor sound, while Warwick Fyfe shines as Lindorf, Coppélius, Dr Miracle and Dappertutto as his firm baritone voice cuts through the air with clarity and menace. Louise Mott is effective as the Muse and Nicklausse as her highly pleasing mezzo-soprano feels focused and unforced. Matt R J Ward, Tim Dawkins, Adam Tunnicliffe and Ashley Mercer tackle multiple roles with aplomb with Dawkins’ Crespel standing out in particular. In the pit, Philip Sunderland brings the right combination of surety and sensitivity to the sound as he effectively tackles the very disparate demands of Offenbach’s enigmatic score.