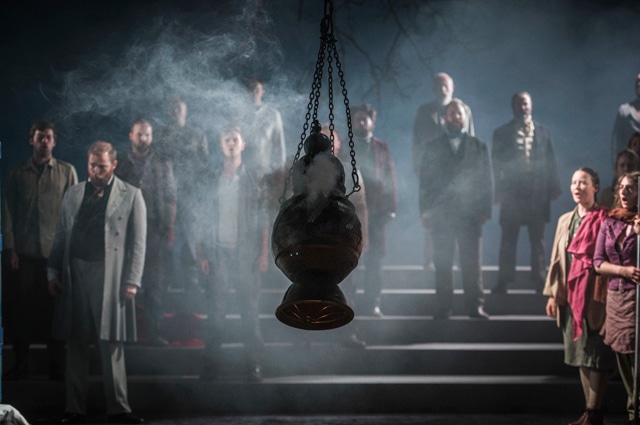 One of the delights of opera presented on the scale demanded by summer venues such as Longborough and Grange Park is that it focuses a director’s mind, and often leads to more inventive but less outlandish productions. In the case of Tannhäuser there is a problem right from the first note in that, if Wagner’s instructions are to be obeyed, the Overture requires Naiads, Sirens, The Three Graces, Cupids, Bacchantes, Satyrs and Fauns to grace a stage that features cliffs, waterfalls and the wildest of dances!

The solution of Alan Privett in his new production for Longborough Festival Opera is to sweep aside the composer’s demands, while implementing an approach that is still a natural fit for the piece. Given that there is more than just a degree of autobiography in a character struggling to perfect his ‘song’ in the face of a world that does not understand him, Privett focuses the Overture on Wagner himself. Thus throughout its entirety we see the seated composer pouring over books, every now and then having another flash of inspiration and immediately reaching for his pen. His obsession with his work is highlighted by the fact that his wife Minna appears, and cannot get an ounce of his attention no matter how hard she tries. The only exception is when in a moment of particular intensity he passionately kisses her, much to her consternation.

That Wagner is played by the person who sings Tannhäuser makes the parallels between the two figures clear enough. In this respect, the Overture does not see Tannhäuser in Venusburg, but rather at the point before he has decided to go there. It is surely he as much as Wagner who is slaving away, and the fact that the only time he pays attention to anyone else is in an expression of passion hints at his susceptibility to seeking fulfilment through carnal delights. At the end of the Overture he tears down a curtain to introduce Venusberg, as if revealing his decision to go there. However, in Act I we immediately cut to the point where he has grown weary of the place so that a parallel is maintained with the Overture because once again we see him pouring over his books. 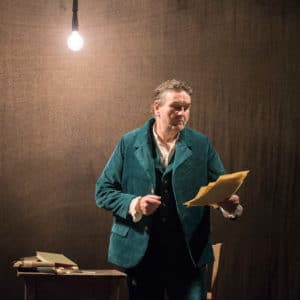 John Treleaven plays Tannhäuser for three performances, with Neal Cooper singing the role for the remaining two. Treleaven has sung many leading Wagnerian roles in the world’s great opera houses. His voice has always been relatively light by the standards of such Heldentenors, but possessed of a rich variety of nuances. In this smaller venue, however, it proves powerful and overwhelming, but rather unfocused. It quivers a few too many times in Act I, and reveals similar weaknesses after the first interval, albeit to a lesser degree. Alison Kettlewell is a commanding Venus, displaying an extremely sumptuous mezzo-soprano. She can lay it on a little too thick, so that her sound sometimes feels unrelenting, but on those occasions when she does allow for some variation, a beautifully clean line suddenly appears.

Kettlewell’s acting is convincing as she reveals amused bemusement when Tannhäuser begins to express his doubts, but becomes increasingly desperate thereafter. However, the impact of their scene together is marred by seeing him spend so much time at his desk on one side of the stage and her upon her swing on the other. It makes sense in terms of revealing their differing preoccupations, but more atmosphere might have been generated by seeing a greater degree of interaction between them.

Treleaven is a very thinking and feeling actor. However, the strength of his presence, coupled with his slightly rough vocal performance, mean that he seems to exist on a different plane to everyone around him, who do not perhaps enjoy the same international standing as him, but whose performances on the night feel somewhat more polished. Nevertheless, class ultimately prevails, and in Act III he looks dishevelled and despondent beyond belief as his voice suddenly delivers everything that we would wish for. Judged solely on Act III, Treleaven’s performance is exceptional and quite an experience to hear in such close proximity.

Where this production is good, it is very good indeed. The staging is simple yet effective, with the Hall of the Wartburg seeing two huge sets of steps dominate the performance space. The fact that they appear ‘oversized’ for the area emphasises the sense of grandeur, and ensures that the Entry of the Guests feels suitably powerful as the chorus sing ‘Freudig begrüssen wir edle Halle’ facing diagonally outwards from its tiers. The chorus proves exceptionally strong, and the fact that it is far smaller than the one featured in the Royal Opera’s production produces dividends. The outstanding blend and balance that it achieves would be far harder to get right when there is a greater requirement to sing out in order to fill a larger auditorium, but because this is a smaller venue ultimately the same level of power is felt by the audience.

As the pilgrims leave and return they work their way down the side of the auditorium, bringing their spiritual sound directly to us while remaining exceptionally well in time with the orchestra and each other. Resources and practicalities probably explain why the Choir of Younger Pilgrims is sung by the women rather than children, and while their differing tone certainly has an effect, the problem would be far greater if they did not sound as good as they do. The same point applies to the Young Shepherd, which is beautifully sung by Chiara Vinci.

Erika Mädi Jones is an excellent Elisabeth, combining fullness of sound with notable levels of clarity and precision, while the other male roles are cast from strength. The security and tone in Donald Thomson’s bass voice make him an outstanding Landgrave, and it would be good to hear more of him at the Royal Opera House and Coliseum. Hrólfur Sæmundsson is a dignified Wolfram who delivers ‘Oh du, mein holder Abendstern’ with sensitivity, and who effectively reveals both his decency and sadness in Act I as he tells Tannhäuser that Elisabeth pines for him, even though he loves her himself. Stuart Pendred and Julian Hubbard are also effective as Biterolf and Walther respectively, and from what we do hear of the latter it seems a shame that in this version, the Paris-Vienna revision, he does not have his own song in the contest.

The greatest hero of all, however, is Anthony Negus whose conducting explores every phrase and nuance in the music while also bringing a slightly lighter edge to the sound than we might be used to experiencing. It is an approach that seems so entirely suited to this intimate venue that hearing the score in this way from such close quarters is an unadulterated joy.

Neal Cooper sings the role of Tannhäuser on 11 and 16 June.

Longborough Festival Opera’s 2016 season continues until 2 August, with one further performance of Alcina taking place in London on 4 August. For details of all events read our preview.