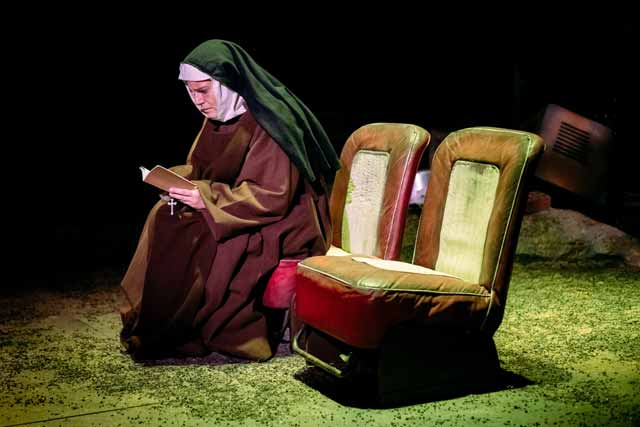 The Angel Esmeralda is a new opera, adapted from Don DeLillo’s eponymous short story by former Scottish Opera Emerging Artist Composer in Residence Lliam Paterson, and librettist Pamela Carter. It is currently enjoying its world premiere by the Guildhall School of Music and Drama, having been commissioned by Scottish Opera. It is a bold work that, far from seeing such operatic clichés as middle-aged men trying to stand in the way of young lovers, feels gritty and highly relevant to the world around us.

Set in the South Bronx in the 1970s, the piece focuses on an elderly Carmelite nun, Sister Edgar, who remembers when things were much simpler. There was a time when eating fish on a Friday and saying mass in Latin seemed to be enough to prevent awful things such as subway fires from happening, but that is no longer the case. Nevertheless, much as she struggles to come to terms with the modern world, she does not shy away from it. On the contrary, she regularly ventures into The Bird, a place of poverty and urban decay, to help its inhabitants, and we see her feeding people and teaching a pregnant woman how to baptise her as yet unborn baby. When a twelve-year old child named Esmeralda is reported missing, both she and her companion Sister Grace try, but fail, to catch up with her.

The next thing we know, the news of the girl’s rape and death has been scrawled on a brick wall, with both sisters expressing remorse at having never been able to reach her. Following this, she is apparently sighted in death, with this leading everyone to believe she is an angel. Whether she really does have an angelic afterlife, or is in any sense still alive, hardly matters as the point is that she brings hope to people.

The strict story is really only half of the opera, which focuses both on Sister Edgar’s struggles to reconcile her faith with harsh realities, and on the culture of The Bird itself. While poverty is rife, a character called Ismael is in his element as he is the leader of a graffiti crew there, while a spirituality of its own arises out of the most tragic circumstances. Angels are painted on a brick wall as a tribute to every child who has died, but even these poignant memorials are turned into nothing more than a tourist attraction when a Guide leads a party there on a tour entitled ‘South Bronx Surreal’. The nuns are particularly put out by this, pointing out that London and other major cities may be surreal, but The Bird is most definitely real.

Paterson’s score feels fresh, innovative and immensely skilful. The orchestra, which is conducted by Dominic Wheeler, includes electric guitar, keyboards and, considering its overall size, quite an abundance of brass. It does not include any upper strings, but this in itself enables the electric harp to shine. The music reveals a variety of influences, but feels far from derivative because one is reminded of the themes that are prevalent in other works so that we are not talking about strict musical imitations. For example, although it is not weighed down with the notion of her dying, the opening in which Sister Edgar ‘soliloquises’ at her bed can only bring to mind Le Prieure’s scene from Dialogues des Carmélites. Her later ‘monologue’ feels rather like Peter Grimes’ own in Act III of Britten’s opera, while parts of the score feel reminiscent of Philip Glass, although not necessarily of his penchant for repetition.

Elsa Roux Chamoux is a highly engaging Sister Edgar, with her mezzo-soprano proving clear and secure across this big sing, and her portrayal of the ageing nun being quite convincing considering she is playing a character far older than herself. Harriet Burns is an extremely effective Sister Grace, displaying a radiant soprano and suitably concerned persona. There are also first rate performances from Damian Arnold as Ismael, who reveals a strong and striking tenor, while the countertenor of Collin Shay as the Tour Guide and soprano of Lara Marie Müller as the Pregnant Woman also leave an impression. Notwithstanding the size of Sister Edgar’s part, this is very much an ensemble piece, and alongside the excellent wider chorus there is a smaller group of five Observers whose harmony singing is extremely tight and accomplished.

The other star of the evening is Martin Lloyd-Evans’ staging itself, with Gregor Donnelly’s set designs putting us right at the centre of The Bird. The majority of the audience sit inches from the central stage with the graffiti wall on one side of them and the orchestra in a sunken pit on the other. Beyond the latter is the space from which Esmerelda is apparently seen after her death, and where the earlier subway fire takes place. The smoke and lighting effects, courtesy of Robbie Butler, portraying this are highly effective and would work equally well for any production of Die Walküre or Götterdämmerung.

Casts vary over the run, with Cast A (described above) performing on 24 and 28 February and Cast B on 26 February and 2 March. For further details visit the Guildhall School of Music and Drama website.