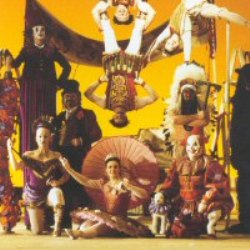 It’s a sure sign of disaster when the loudest cheer during an opera comes in response to a circus divertissement. Sadly, this was the case in this, the Royal Opera’s second revival of Francesca Zambello’s production of Smetana’s The Bartered Bride. And it wasn’t even because the acrobatic stunts were particularly impressive (quite the opposite in fact). The audience was just relieved to be able to ignore the ghastly, cheap sets by Alison Chitty, not to mention Kit Hesketh Harvey’s witless English translation.

You’re meant to end the year with turkey, but the company has inverted tradition by serving it up in January. The production was designed for Sadler’s Wells in 1998 when the ROH was closed for restoration, and was so badly received that I can’t believe it was revived in 2001 at the House, let alone for a second time. Presumably Sir Charles Mackerras wanted to conduct it in the theatre again in the wake of his recent Chandos recording in English, released for his 80th birthday. Mackerras and the orchestra provided the only wholly satisfying element of the evening, though most of the singers were excellent. But there was nothing they could do to overcome the banality of the direction, sets or libretto (in this version).

Smetana wasn’t the greatest fan of his opera – he wanted the serious-minded Dalibor to gain more prominence – and on the basis of this performance I am tempted to agree with him. The story is about two lovers, Marenka and Jeník. Jeník has been denied the family fortune by his wicked stepmother. So he disappears and concocts a plot whereby Marenka is bartered to Mícha’s son. The girl is nearly married off to Vašek, the younger son, but up pops Jeník at the end to reveal his true identity and claim Marenka as his bride. Why does it take three and a quarter hours to relate this inane drivel? Aside from the overture, which was given a sprightly rendition under Mackerras, Smetana appears to have been largely uninspired, and the work is a sprawling, formless mess.

Kit Hesketh Harvey’s translation appears to be an attempt to emulate Gilbert and Sullivan-type humour, and in his hands the opera becomes a pale imitation of that team’s tongue-in-cheek, satirical operettas. This renders the music even worse, whitewashing its character so much that huge blocks of ten minutes or more seemed to be repetitions of the same words and sentiments. For instance, the opening love duet seemed to go on forever using the same clichéd words about ‘loving until the end of time’. You may as well stay at home with the DVD of Moulin Rouge for a classier interpretation of the same theme.

The performance would have flopped altogether had the cast not been so dedicated. In the New Zealand tenor Simon O’Neill Mackerras has found an ideal Jeník, from the vocal point of view at least. He will surely be a great Walther von Stolzing in Wagner’s Meistersinger one of these days, as he has such a big yet lyrical voice. I wasn’t quite convinced about the chemistry between O’Neill and Susan Gritton as Marenka, though they sang together quite beautifully. However, Gritton was impressive in Mitridate last year and was equally marvellous on this occasion, surmounting the impossibly long (and boring) aria she has to sing in the final act with panache.

Peter Rose was engaging as the marriage broker Kecal, with a nice booming bass voice and a cunning stage presence. Timothy Robinson took a while to warm up as Vašek, and he was ill served by Harvey’s translation of the stutterings of this character; later on, he showed elegant phrasing, and the duet with Marenka worked well. Robert Tear soldiered on as the Ringleader, and the smaller roles were generally well sung and acted. The chorus was rousing at first, and they sang well, but being clearly unconvinced by Zambello and her Choreographer Denni Sayers’ barn raising dance (which pales against the infinitely more enjoyable MGM musical Seven Brides for Seven Brothers), and indeed all the dancing and silly actions that were forced upon them, they were decidedly disconnected in spirit by the end.

This was a grim start to the year for the Royal Opera. Let’s hope for better things when Zambello’s production of Cyrano de Bergerac comes to the ROH in May.