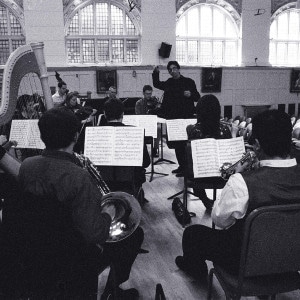 The suppression of avant garde music by the Nazi authorities in Germany and Austria in the 1930s and the forced exile of politically suspect and Jewish composers are fairly well known, but knowledge of the music itself is still sketchy. The chance to hear some of that music – including works that had never previously been performed in the UK – made The Continuum Ensemble’s ‘Swept Away’ weekend at Kings Place an especially worthwhile series.

It would have been impossible to present the large-scale orchestral and operatic works dubbed ‘entartete’ (‘degenerate’) by the Nazis and vilified in their notorious ‘Entartete Musik’ exhibition in Düsseldorf in 1938. The forces required would have been too vast. Instead, The Continuum Ensemble under conductor Philip Headlam focused on the smaller, edgier works produced in Berlin and Vienna in the 1920s – a decade of innovation, daring and brilliance.

Some familiar works were included, such as Kurt Weill’s and Bertolt Brecht’s 1927 Mahagonny Songspiel – the early, pared down, version of what was to become their Rise and Fall of the City of Mahagonny . There was also a finely wrought rendition of Weill’s 1924 Violin Concerto, with its angular melodic lines coolly handled by soloist Hugo Ticciati. Most of the music was new to contemporary ears, and much of it focused on Viennese-born Ernst Toch. A widely respected composer, Toch was championed by the likes of Otto Klemperer and Wilhelm Furtwängler. But by 1936 he found himself – like so many of his contemporaries – in exile in California. His music from the 1920s and early 1930s revealed an astonishing degree of originality, with experiments in formal deconstruction and thematic abstraction. His three-movement Gesprochene Musik of 1930 was inspired by alternating the speeds of gramophone recordings, while his short mock-opera Egon and Emilie (subtitled ‘Not a Family Drama’) from 1928 saw the histrionic excesses of the actress Emilie (sung by Donna Bateman) comprehensively ignored by Egon, a speaking role taken on by actor Martin McDougall.

Paul Hindemith’s short opera There and Back (1927) was equally clever and funny. In it, the melodramatic extremes of nineteenth century opera were ridiculed in the brave new world of the 1920s. A loving couple’s jealousy turns to murder and suicide before a Wise Man (Norbert Meyn) calls a halt to such trifles, triggering a replaying of the opera in reverse. That spirit of modernism and wit was repeated on the final day of the series, with a programme of cabaret and theatre songs. They included Friedrich Hollander’s songs on cocktails, blondes and kleptomania, and Mischa Spoliansky’s hugely popular ‘Die Beste Freundin’, which became something of a lesbian anthem. Herbert Zipper’s Dachaulied brought the weekend to a close. Composed and taught to inmates in the Dachau concentration camp by humming (prisoners were not allowed paper and pencil), it represented both the enduring strength of music and the appalling waste wreaked by the Holocaust.

The third concert of Swept Away will be broadcast by BBC Radio 3 on Afternoon on 3 during the week of 13-17 July.