Barry Creasy joins in the exploration of eternal questions through music, philosophy and science. 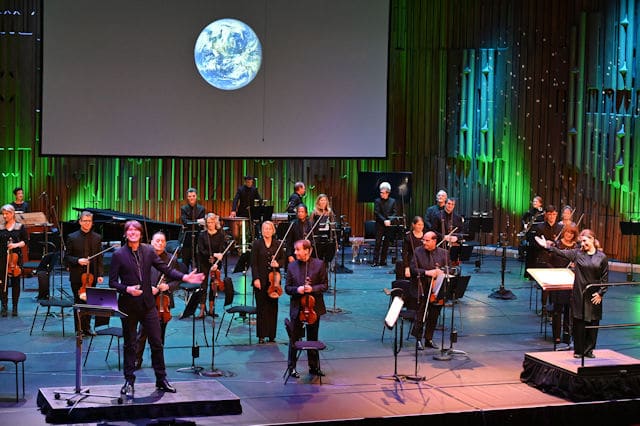 Professor Brian Cox delivers his expertise (which moves beyond his ‘official’ discipline of particle physics into realms that include cosmology, astronomy, meteorology, evolutionary biology and philosophy) with a measured enthusiasm that harnesses academic authority to naïf wonderment, providing instant audience appeal.

Sunday evening’s mix of music and science featured cosmological explanations and philosophising by Cox, allied to some well performed music by a socially distanced cut down version of the BBC Symphony Orchestra under Dalia Stasevska, in an exercise in trying to answer the question “what does it mean to live a small finite life in a possibly infinite universe?”.

The awe of the question was splendidly illustrated by the final movement of Sibelius’ Fifth Symphony, whose ‘swan theme’ always seems to suggest the opening up of sweeping vistas. The restrictions on personnel did not allow for the rich textures that the symphony normally delivers, but the 30-something members of the orchestra gave a thorough account of Iain Farrington’s arrangement for reduced forces, presenting a unified sound still full of vibrancy and emotion. The projected backdrop (beginning with a representation of the big bang, and moving through to a montage of a future, imaginary view of cities on other planets) contributed to the impact of the music. 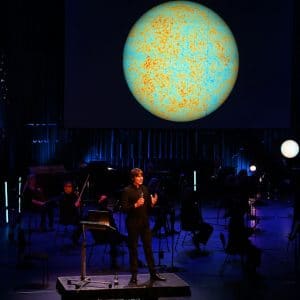 Cox then moved the main question to a consideration of humanity’s insignificance in cosmological terms against its value – to ascertain how important humankind actually is in the grand scale of things. Although it was an obvious choice for such a presentation, Charles Ives’ The Unanswered Question was chosen as the musically illustrative work. Here, the orchestra was on safe ground, as Ives’ orchestration for the work is much smaller – calling, effectively, for combined chamber ensembles. Stasevska directed a poised performance whose timing and dynamic were acutely controlled to illustrate the unfolding of the question through long, slow string chords (some excellent intonation here) gradually augmented by the woodwind, who, again, created a well-blended sound. Phil Cobb’s trumpet solo was deftly managed throughout, and the al niente ending engendered the expected hush from the audience.

“Cox… in an exercise in trying to answer the question “what does it mean to live a small finite life in a possibly infinite universe?””

A lengthy but fascinating peroration on the origins and nature of the universe (and, indeed, multiverse) followed, covering concepts of entropy change (and Wettlaufer’s ‘Universe in a Cup of Coffee’), pre big bang inflation, cosmic microwave background radiation and the ‘bubble multiverse’; it concluded with a message for all of us: meaning is rare, local and temporary. As Cox put it: “The way we behave to each other may matter… beyond the shores of our planet, maybe even beyond the shores of our galaxy. Meaning is located within us, and it is our responsibility to cherish and protect it”.

Profound words that could only be followed by something as profound as Mahler’s Tenth Symphony, whose first movement (in a cut down arrangement by Michele Castelletti) brought the evening to a close. The opening viola passage was perhaps a little shaky, but the performing soon stabilised to present all of Mahler’s insecurities inherent in the symphony: the unsettled string passages; the whirling, shiftless woodwind; the complex, unresolved harmonies that occasionally crystallize into moments of warm satisfaction. Stasevska once again coaxed a deal of nuances of texture from the players, imparting the work with a solid, late-Romantic bloom, and a twinkling, evaporating close that accompanied a projected vision of our blue planet in space.

Although an evening of more numerous, shorter self-contained musical works might have been expected, the three, meaty (albeit, in some cases, incomplete) works appealed, appropriately, given the spoken content, to more subtle sensibilities.