Longborough’s 2021 season concludes with a production representing a new direction for its Emerging Artist programme. 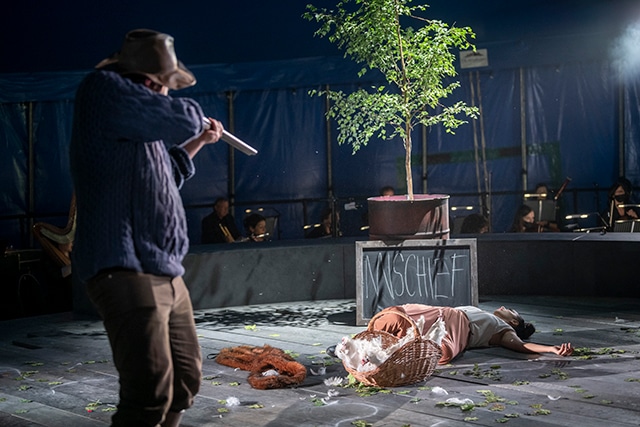 The Emerging Artist programme is Longborough Festival Opera’s initiative to help up-and-coming singers and players. While recent years have seen it focus on 17th and 18th century works including Alcina, Orfeo ed Euridice, L’incoronazione di Poppea and La Calisto, this year it has turned to the 20th century with Janáček’s The Cunning Little Vixen. The added bonus is that 2021’s offering also features the excellent Longborough Youth Chorus, comprising children who are local to the area.

Performed in the venue’s newly erected ‘big top’, designed to aid social distancing by creating a larger and more open space, this highly dynamic staging has a touch of the Brechtian about it. Performers, some of whose costumes have a circus-like quality, frequently fill and move about the stage, and chalk on a board the title they have assigned to each scene. In this way the final scene of Act I is ‘Captivity’, the first of Act II ‘Adventures’, while ‘Mischief’ and ‘Loneliness’, among other things, appear in Act III. They sweep up any debris on the stage, such as the chickens’ feathers after the Vixen has killed them, between scenes, and move props around including a tree in an oil barrel that often takes centre-stage but is sometimes pushed to the side.

This interaction between the wholesome tree and its dirty, rusty container says something about Olivia Fuchs’ production, which is designed by Nate Gibson, as a whole. Fuchs would appear to take the view that the opera is not simply about nature, but about the interaction between that and society. This is not simply because it features humans who hold chickens captive and want to kill foxes for their furs, but because the animals themselves are anthropomorphised. The very character of the Vixen is based on the idea that we see the animal as cunning, intelligent and sensual. This production emphasises this by seeing the Vixen, who is dressed in a white top and baggy brown trousers, carry her tail and frequently wear it over her shoulders. Thus, even in her own hands, it feels like the fox fur that the Poacher desires for Terynka. In contrast, the Fox is dressed in tweed, which makes him seem upstanding, but is certainly ironic since that is what men might wear to hunt the creature.

The title chalked up to the opening is ‘Wood Wide Web’, which again emphasises the ecosystem of the natural world, while applying a human twist to our understanding of it. The chickens are dressed as chorus girls, so that their red feathers act as both plumage and costume, which ties in with the Vixen’s claim that they have no life other than to serve men. When she kills them she has to wring their necks in mid-air, since the production was designed with social distancing in mind, but the action feels no less impactful for that. Some performers wear masks when on stage. Although the idea would have been inspired by necessity and practicalities, it is made to work with the theatrical nature of the production by tying in with such concepts as mime. Frances Gregory as Lapák wears a mask until she actually sings, emphasising how the Dog is effectively silenced by humans.

David Pountney’s English translation is inspired (there is an interview in the programme illuminating his thought processes behind it), while the cast is notably strong. As Vixen Sharp-Ears, Julieth Lozano has it all. Her soprano demonstrates great power and aesthetic refinement when at full throttle, but she shapes tricky lines that are less easy to support with equal skill. She proves to be a splendid actor who can be cheeky, daring or seductive, and always has the right expression or glint in her eye for the occasion. Lozano’s voice also works very well with the beautiful mezzo-soprano of Frances Gregory as Gold-Spur, the Fox so that both their Act II meeting and moment alone in Act III are highly moving. Kieran Rayner produces a tremendous sound as the Forester, as does Aaron Holmes as Harašta, the Poacher. The thirteen-strong Longborough Festival Orchestra, under the baton of Justin Brown, is on fine form, with Jonathan Lyness’ reduced orchestration, if anything, making the full range of styles inherent in the score even more visible.

Details of Longborough Festival Opera’s 2022 season will appear on its website in due course.