It may have had to contend with COVID-19, but this ‘back to basics’ production of The Cunning Little Vixen could not be more delightful if it tried. 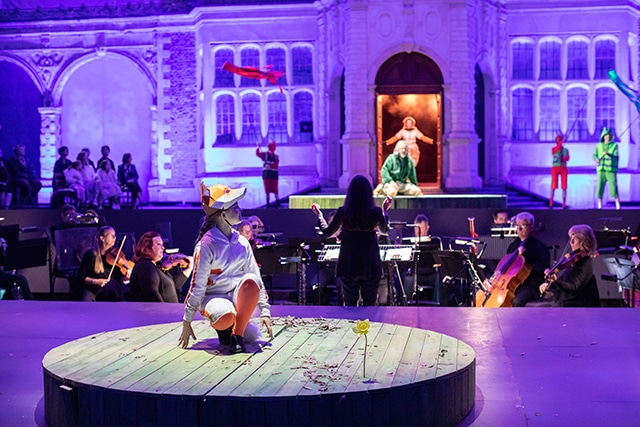 Opera Holland Park’s presentation of Janáček’s The Cunning Little Vixen proves absolutely perfect for its surroundings. This summer opera venue lies in the heart of London, and Stephen Barlow’s new production maximises on this by making our beloved Vixen an urban fox so that we feel as if the action really could be occurring before our very eyes in this location.

If the idea seems simple enough, the genius lies in the attention to detail that is shown in everything that flows from this basic premise. The Badger’s sett becomes an overturned wheelie bin, which when the Vixen takes over she puts her mark on by prettifying with sunflowers. These blooms become a recurring motif with chorus members donning their colours, while the wheelie bin is used as the bar in the inn scenes by being stood upright and having a beer tap, complete with London Pride logo, placed on its lid. It is little touches such as this that provide a sense of continuity and cohesion to a staging that was never going to be hi-tech because Barlow always knew it would have to comply with ever-changing COVID-19 rules.

Ultimately, however, what is produced is both colourful and focused. The bespoke design for the theatre and auditorium for this year’s season, by takis, sees the main stage appear behind the orchestra, and a gangway run around it. In this production, designed by Andrew D. Edwards, only the central part of the stage behind is used (which allows for some audience members to occupy its sides) with the remainder of the action taking place on the gangway in front. In this way, the insects, played by masked children, can easily enter from the auditorium and dance on it with colourful ‘windsocks’, thus setting the dynamic for the entire evening. 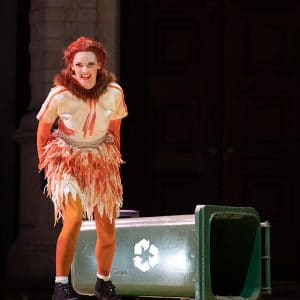 The costumes see all of the foxes adorned in white and orange. The clothes they wear mean that the interpretation of the animals is far from literal, and yet it remains easier to see the performers before us as real foxes than in many other productions that have ultimately adopted the same approach. The chickens wear blue pinafore dresses, which ties in with the conservatism (admittedly with a small ‘c’) that the Vixen accuses them of in this translation. This version is not overtly political, and it may not even have been intentional on anyone’s part, but when we contrast the red(dish) Vixen with the chickens in blue, it is tempting to see this as a way of highlighting their differing philosophies and outlooks on life.

As a rule, the production explores the range of moods extremely well, bringing out what is both playful and deeply emotional in the opera. However, it does play down the darkest elements so that the killing of the chickens feels mischievous rather than macabre. The Vixen dispatches them by bursting the balloon each carries so that a literal interpretation might be that she has simply destroyed their eggs. However, it could be argued that different settings require different tones, and that a balmy, summer’s evening in the park lends itself more readily to a slightly lighter one. In fact, one of most intriguing aspects of the evening is just how emotional it can be. The face of the Forester (a splendid Grant Doyle) as he hears that the frog before him is the grandson of the one he previously saw makes for a very emotional ending, while the ‘courting’ scene is no less poignant. This is in large part down to the outstanding performances of Jennifer France as the Vixen and Julia Sporsén as the Fox. The pair played Zerbinetta and the Composer in Ariadne auf Naxos here in 2018 and now, as then, the chemistry between them flows extremely naturally. The relationship between the Forester and Vixen is no less affecting, and for all the sights of guns and talks of killing, we can always tell that the Forester really does feel something for her. It is indeed the very fact that we know deep down he would never hurt the Vixen that makes her final death so sad for both him and us. Other standout performances come from John Savournin as the Priest and Badger, and Ashley Riches as the Poacher.

The playful elements still abound so that the fun English translation, courtesy of Paul Hastie, sees conductor Jessica Cottis addressed by name, and refers to the peacocks that can on occasions be heard during performances here. In addition, the Fox brings food to the Vixen in the form of sandwiches in a Pret a Manger bag, while references to football are included to tie in with Euro 2020. All this said, the evening would still not scale such great heights were the musical credentials not as strong as they are. The City of London Sinfonia performs a reduced orchestration by Jonathan Dove, and the delineation of line as well as the overall balance displayed across the 19-strong ensemble ensures that all of the sonorities inherent in the score are brought out, while the sound as a whole amply fills the auditorium.

Harriet Eyley sings the Vixen and Alys Mererid Roberts plays the Chocholka at 14.00 on 25 July. This performance is a Discovery Matinee and Relaxed Performance.