The Elixir of Love @ Coliseum, London 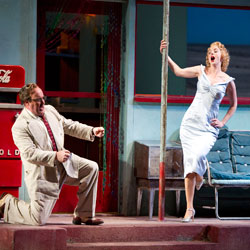 Anyone who has ever driven from Colorado westwards through New Mexico, Utah and Arizona, en route to the Grand Canyon, would recognize the sweet little diner plonked on the desert road, surrounded by sand and blue sky, which forms the mainstay of Isabella Bywater’s design for Jonathan Miller’s production, first seen in 2010 and revived by Elaine Tyler-Hall. The set is a delight of course: it’s a sort of bright daytime version of Hopper’s ‘Nighthawks’ and it works well as a backdrop for the gaudy colours of the girls’ costumes as well as the sometimes fickle emotions on display.

The visual endearment is not always echoed in the action and dialogue – basically, it’s just not very funny. I think I laughed twice. In 2002, in the ‘old’ production, I recall guffawing throughout, especially at Andrew Shore’s hilarious Dulcamara, with his irresistible showman’s turn: Shore takes that part again, and as always the clarity of his diction and sheer vocal quality are a joy, but he seemed to have to work very hard here, and to not much effect. This had a lot to do with the translation, which was, frankly, risible in the worst sense.

Romani’s original libretti were famous for what Giuditta Pasta called so flowing, so expressive a quality that “the lineaments of mouth and face compose themselves in such a way that they just feel beautiful”. Here, the opposite was true, and the excruciating American accents forced on the cast did not make things any easier. You could actually feel them wanting to sing, say, dahns and not dawnce, wed-ding and not wead-ing. I love Americans – I married one but their accents, especially mid-West ones, do not, shall we say, come easily to the Conservatoire-educated.

Fortunately, the singing compensated for much. Shore’s assured, brilliantly phrased and mellifluously sung quack was one of many fine performances, the star amongst them being Sarah Tynan’s gorgeous Adina. She brings the art of a Handel specialist to the role, her elaborate trills not merely decorations but revelations of character, and her acting is spot on, ‘Some Like It Hot’ wiggle and all. Ella Kirkpatrick was an exceptionally vivid Giannetta, and Benedict Nelson sang with confident swagger as Belcore. Mr Nelson impressed me at the 2009 Wigmore Song competition so I was not surprised to see such rapid progress in his career.

Ben Johnson has had even bigger success in competitions, and for most of the time one can hear why, since his is a sensitively used tenor, not especially beautiful but capable of both volume and sweetness when required. He didn’t quite convince me as a schmuck / doofus, but then Nemorino so rarely does.

The male chorus’ lot was not a happy one; is ENO so strapped for cash that the same members who play the old geezers / hayseeds in their denims and dungarees, are then forced to appear as lusty soldiers? Do Bubba a favour and return him to his place on the rickety porch, please. The ladies fared better in their housewifely frocks, although there were times when they seemed a little at sea.

Rory McDonald, yet another of those so-young conductors who look twelve yet have the musical sensibility of thirty five, directed a lively, sometimes even sparkling account of the score, even if at times he seemed to want to run away with the music. Perhaps he was trying to drown out those ghastly accents – have mercy on the cast and lose them, please, since the dialogue is quite enough for anyone to cope with.