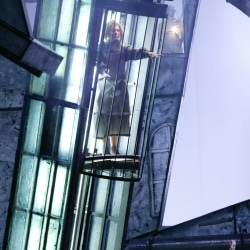 Much has been made of the supposed rivalry between the Kirov and Bolshoitheatres, with both visiting London at the same time for short seasons ofopera and ballet from their native Russia.

With the Kirov exploringShostakovich On Stage at the Coliseum, their counterparts opened withFrancesca Zambello’s acclaimed direction of Prokofiev’s opera at the RoyalOpera House.

The subject matter is not, of course, for the faint hearted, drawn fromValery Bryusov’s novel of the same name.

Principal character Renata(Tatiana Smirnova) is a truly tortured soul, her very beingpossessed by her fiery angel, Madiel, a childhood sweetheart who has sincepassed away. Renata, however, has seen him in Count Heinrich, a more recentacquaintance, played by the dashing Alexander Krutyakov in awordless part. Tortured by demons, Renata has a potential rescuer inRuprecht (Boris Statsenko), whom she bewitches throughout,convincing him of the overwhelming need to find Heinrich, an encounter onwhich her whole being depends.

The challenging first part included Renata’s story from that of a younggirl, told in an unbroken ten minute spell that saw Smirnova start somewhattentatively but grow to fill the stage, her vivid scarlet dress ensuringthe audience’s eyes followed her wherever she went. Statsenko, in far moresober beige and grey, was her full-bodied support as a deluded Ruprecht,portraying well the character’s increasing infatuation as he became inturns perplexed, disbelieving and enraged.

As the pair sought to find Heinrich their different reasons wereunravelled – Ruprecht wanting him dethroned as Renata’s obsession, but shewanting the ultimate culmination of her love. In their conflicting queststhey were ‘helped’ by the fortune teller, the astonishingly rich alto ofEvgenia Segenyuk, who cast a spell. The wonderfully smoky effectfrom her cauldron drifted upwards but she saw blood, seemingly all overRenata’s dress.

The pair should have listened, as a well-choreographed duel betweenRuprecht and the recently located Heinrich took place, with Renata’s aidebadly wounded. As if that wasn’t enough, his chances of recovery werehindered, Renata refuting her love for him, affections changing like thewind. Smirnova was authentically infuriating here!

A difficult first half then, but well structured as the second halfbrought immediate light relief in the form of conjuror Mephistopheles, therosy-cheeked pudding of a figure voiced with great humour by MaximPaster, who effortlessly became the opera’s comic foil. With Renataseeking solace in a convent the culmination was a stunning scene ofattempted exorcism, the first part taking place behind the transparentcurtain with luminous accompaniment from Alexander Vedernikov‘sorchestral forces. Here Elena Novak‘s Mother Superior and VadimLynkovsky‘s Inquisitor took centre stage, the latter strugglinginitially to project over the full and loud orchestration.

The final scene was full of dramatic tension, the slate grey set ofbuildings now turned inwards and blazing with light as a potential gatewayto heaven, the progression to the opera’s climax was forcefully realised. Apowerful experience which was helped by a visually exciting production anda host of memorable performances, all providing a timely reminder ofProkofiev’s operatic credentials.