by Barry Creasy
published: 15 May 2021 in Opera and Classical Reviews
Tweet

The London Symphony Orchestra under Lee Reynolds in a programme of Percy Grainger. 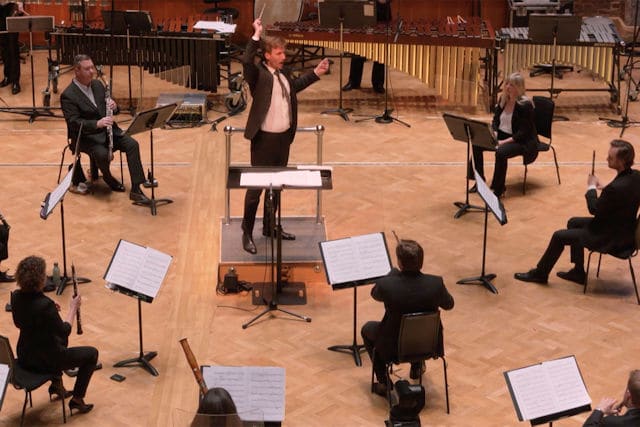 There’s a strange sense of recklessness about programming a concert for a large wind ensemble; during the pandemic wind instruments and voices – because of their high volume breath output – seem to have been seen particularly as persona non grata. With restrictions relaxing, though, it meant that the London Symphony Orchestra could safely field their wind section (augmented by pianist, percussionists, organist, harpist and double bass players) for an audienceless concert from LSO St Luke’s. And it seemed only right that their composer of choice – whose works are in the repertoire of every wind band – should be the idiosyncratic Percy Grainger.

Grainger remarked of himself that “he loves every kind of music of whatever locality and period that he has ever heard”, and the pieces in the concert were cleverly chosen to illustrate this point, and to display the composer in his many moods, and influenced by a wide range of sources. The works were interspersed with apposite readings from Grainger’s journals (often written as letters to friends and relatives) read with beautifully intuitive changes of tone by Roger Allam.

Lee Reynolds was at the helm, and under his sure direction the band produced all the delicious changes in texture that one would expect from this quirkiest of musical creators.The big, jolly numbers were represented by The Lads of Wamphray March and The Gum-Suckers’ March which bookended the concert; these were delivered with surety – not only in the broad strides of their opening bars, but in the sudden  changes of tempo and colour that Grainger demands, such as in the charmingly nostalgic trio of Gum-Suckers’. There’s always an understanding, with Grainger, that this is wind-band material of an orchestral kind, rather than, necessarily functional military band music, and the LSO and Reynolds pointed this up perfectly, allowing instrumental timbre, ambience and a requirement for rubato – rather than the need for a steady beat – to drive the tempi.

Grainger’s forays into folk music were represented by his six movement suite Lincolnshire Posy, and again, Reynolds and the orchestra rose to the challenge of depicting the varying moods of the work from the haunting cornet solo in ‘Horkstow Grange’ through the oddly mediaeval quality of ‘Rufford Park Poachers’ and the swagger of ‘The Brisk Young Sailor’, to the authoritative (but occasionally comic) blastings of ‘Lord Melbourne’ and the inherent Irishness of ‘The Lost Lady Found’.

Grainger’s influences from other composers were capably displayed in the 20th century Modernism of Ballade No. 17 – an arrangement that takes the modal line of a piece of Guillaume de Machaut and sets uncompromisingly against it some stark, almost atonal counterpoint – and Blthe Bells, a gloriously ‘West End show tune’ arrangement of Bach’s Schafe können sicher weiden full of glockenspiel, marimba and xylophone sonorities.

Representing Grainger’s more conflicted views on pacifism and power was The Power of Rome and the Christian Heart, a work that can really only be called a chromatic tone poem, and the orchestra’s regular diet of Mahler and the Late Romantics came to the fore in a sensitively constructed tapestry of changing colour and texture that included swirling harp passages, sinister brass and some impressive xylophone work.

And, yes, they did perform Country Gardens. Beautifully.

The concert can be accessed via subscription to Marquee TV.