Two casts battle it out at The Royal Opera’s Magic Flute. 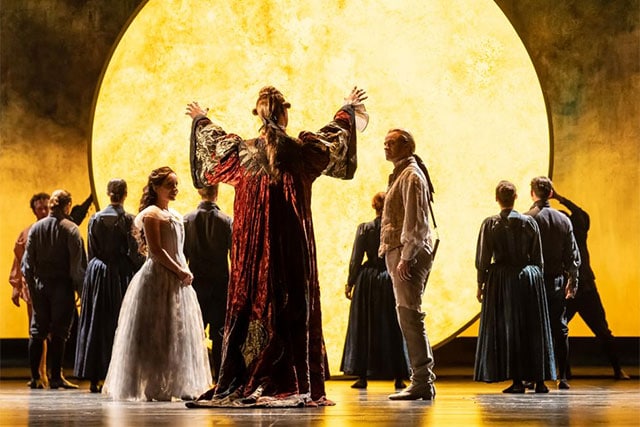 David McVicar’s venerable staging of The Magic Flute made a welcome return to the Covent Garden stage, showcasing a flush of exciting house debuts whose new blood eradicated any sense of routine from a production first seen in 2003. Now on its tenth revival, it has served the House well, and on the evidence of these two performances, there’s plenty of life left in it yet.

John Macfarlane’s monumental designs, which at previous revivals have often felt oppressive, seemed less so here – no doubt in part to the lightness of touch revival director Dan Dooner took in recreating the action – directing the singers and chorus with a sure hand.

The opera’s journey from darkness into light is chartered unerringly well, and there’s no shirking from the inherent misogyny in the original – Sarastro’s views on women drew audible gasps from the audience – but the key to any successful staging is balancing the comedic with the serious. McVicar gets it right about 80% of the time, although there were areas where the second act dragged – the temple shenanigans do go on a bit ­– but overall, this is as probing and engaging view of this troublesome opera as you’re likely to see these days.

Musically, it was first-rate too. Bernard Richter took a while to settle, having oversung parts of the Portrait aria, but thereafter was a Tamino to be reckoned with – giving notice of a highly individual, muscular tenor voice. He was well matched with Salome Jicia’s lyrical Pamina, which at times revealed hints of metal, especially above the stave. She was particularly affecting in the second act, delivering an effective ‘Ach ich fühl’s’. American coloratura Brenda Rae made an auspicious house debut as the Queen of the Night – secure and firm in ‘O zittre nicht’, and rightly bringing the house down with her spitfire coloratura in ‘Der Hölle Rache’. Krzysztof Baczyk certainly rumbled effectively as Sarastro, but his German was far from idiomatic. 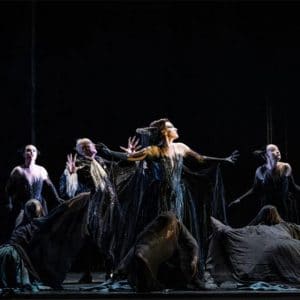 The superb trios of ladies (Alexandra Lowe, Hanna Hipp, Stephanie Wake-Edwards), and boys (Rafael Flutter, Ben Jardim, Victor Wiggin), showed the depth of casting, while Harry Nicoll and Donald Maxwell were once again outstanding in their now classic turn as the two priests. Jochen Schmeckenbecher made his mark as the Speaker of the Temple as did Alan Pingarrón and James Platt as the Armed Men. Michael Colvin and his entourage of grotesques milked Monostatos’ creepiness for all it was worth.

Despite the overall excellence of the cast, one performance stood out – Huw Montague Rendall as the Papageno of one’s dreams, making one of the most exciting House debuts for years. His winning characterisation, superb comic timing, and exemplary German had the audience eating out of his hand. Indeed, in Act II when Papageno asks whether he should hang himself or not – ‘Ja oder nein’, the audience shouted back ‘nein’. Physically he held nothing back – running into walls, managing the leap onto Papagena’s (a sparky Haegee Lee) bed in one go – yet still managed to infuse the character with a sense of charm and vulnerability. Combined with a gloriously lyrical baritone voice, a star was well and truly born.

In the pit Hartmut Haenchen led a mostly sprightly performance, and was rewarded with warm playing from the orchestra, but the priestly sections could have done with a bit more energy. Needless to say, the Chorus was on terrific form.

A second visit three days later to catch the alternate cast offered a very different experience. The only principal singer common to both was Brenda Rae’s Queen of the Night, and once again she delivered the goods in both her arias – no mean feat given an 11.30 start time. With a less exuberant Papageno to hand, the balance of the opera shifted more towards Tamino and Pamina. Daniel Behle was an ardent, free-voiced Tamino, while the young Austrian soprano Christina Gansch epitomised Pamina’s vulnerability to perfection, with wonderfully floated high notes, scrupulous attention to phrasing, and a rendition of ‘Ach ich fühl’s’ which stopped the heart.

James Platt more than justified his promotion from Armed Man to Sarastro, singing in idiomatic German, with wonderfully projected, sepulchral low notes. Peter Hoare was a brilliantly over-the-top Monostatos while the new ladies (Anita Watson, Rachel Kelly, Gaynor Keeble) and boys (Malakai Bayoh, Yanis Charifi, Daniel White) were all superb. David Soar was a benign Speaker of the Temple. Peter Kellner’s take on Papageno was more traditional – the slapstick antics which had come so naturally to Montague Rendall, here seemed forced and laboured – but Kellner sang the role superbly. He was ably partnered by Alexandra Lowe’s Papagena, although it was a shame their closing duet came unstuck at one point.

Given the early start, there were plenty of kids in the audience who clearly lapped it up, despite one who wailed throughout the overture. A critic in the making? Maybe not, as Haenchen and the orchestra were on fine form, once again.

The Magic Flute is sung in German with English surtitles.