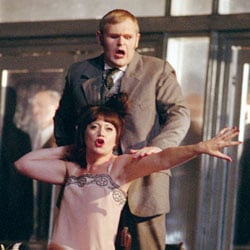 Sir Charles Mackerras has long been a champion of Leo Janček’s operas and indeed was responsible for the UK premiere of The Makropulos Case at Sadlers Wells in 1964.

During his reign as Musical Director of Sadler’s Wells (later the English National) Opera between 1970 and 1987, his Janček productions were legendary, none more so than the extraordinary David Pountney / Maria Bjornson Makropulos Case in 1982, starring Josephine Barstow.

Now he’s back for the first new production since then, the first for ENO by Christopher Alden. It’s an altogether darker reading of the poignant story – who could now believe that it began life as a philosophical comedy? – by Karel Čapek, who shared Janček’s Bohemian hometown of Brno.

Emilia Marty is the latest persona of the 337-year old heroine, used as a human guinea pig to test an elixir of life and now – despite looking young, beautiful and vibrant – searching for the secret recipe because she realises she will soon die without a second fix.

Emilia, born Elina Makropulos in 1585, has gone through her many years changing her name at intervals – retaining only her initials – and abandoning friends and lovers to preserve her secret. Previous productions have made much of her melancholy world-weariness.

Most have, however, presented her as a sympathetic figure. Cold, yes – but polished, accomplished, the famous diva and role model. Alden has taken his character reading from her youth when forced to take the potion: his Emilia “carries the soul of a traumatized sixteen-year-old girl in the body of powerful, indomitable woman”.

This is questionable in that a 16-year old in 1601 when the deed occurred was almost certainly a great deal more worldly-wise than the over-protected and indulged teenager of today, and it makes Emilia a pretty unrewarding part to sing. Her body may not have aged but years would, one have thought, have brought some maturity of mind and perspective, before the ennui set in.

Alden’s other innovation is to place the action very firmly in the exact location intended – Prague in the early ’20s – and to look behind the opera to the Čapek play that preceded it.

Čapek is now little known but was a major figure in the Czech scene. Among many other claims to fame he invented the concept of a robot (and the word) in his play 1920 play, R.U.R. Alden has chosen to add robotic supernumerary figures to the action, sometimes to good effect but more often providing a distraction from the protagonists.

The single, monochrome set (Charles Edwards) is very effective. A perfect representation of Czech modernist design of the year of the opera’s premiere, 1926, it also brings to mind Fritz Lang’s iconic 1927 science fiction film, Metropolis, and indeed this production is heavy with German expressionist ideas.

The music, of course, is the thing. The score contains much of Janček’s most glorious work, from the sweeping overture with its rich use of percussion to the achingly beautiful, soaring strings for Emilia / Elina. How wonderful to have Mackerras back for this production, inspiring the always-reliable ENO orchestra to produce their most impressive sound in some years.

The opening night was being recorded for CD, which could explain why on his first entrance as Baron Prus John Wegner was wearing a mic that hadn’t been perfectly adjusted for level. This was quickly corrected, however, and in general the singing was exemplary. Wegner’s ENO debut was impressive, his baritone deep and rich.

Cheryl Barker is fast becoming a welcome sight at ENO, her last appearance as Salome showing that she can act as well as produce a sublime and sure soprano. Her Emilia Marty is a cold-hearted bitch, and not helped by unflattering costume design, but she sounds wonderful. One of her lighter moments – a brief flirtation with the now-senile Hauk, a lover from her past (a welcome return to the Coliseum for Graham Clark)- is touching, and sympathy grows in the final act as she recalls her love for Pepi, the cause of the eponymous, epic law case. It’s an impressive performance but the direction means it’s not one to be treasured.

Robert Brubaker is solid as Albert Gregor, Thomas Walker suitably nervy as Janek. and Elena Xanthoudakis pretty and sweet-toned as Kristina. John Graham Hall as lawyer’s clerk Vitek provides the only really good diction of the evening, as always making the most of a character part, and Neal Davis is the fussy lawyer, Dr Kolenaty.

An interesting directorial debut for Alden, then; thoughtful and thought-provoking, but ultimately unsatisfying. Focussing on the dystopian futurism of the 1920s is certainly a valid approach but belies the fact that the issues of life and death preoccupy us all, in every age. Exploring the cold and mechanistic aspects but ignoring the emotional side left this viewer feeling – well, rather cold and mechanical. It’s true that all the other characters have emotion and to spare, not least poor Janek who commits suicide – but in this staging even they come across as two-dimensional, almost robotic figures, not people we can identify with today.

Always worth seeing for the music in any case, there are only eight performances – and you’d be crazy to pass up the opportunity of hearing Charles Mackerras back with his beloved Janček.