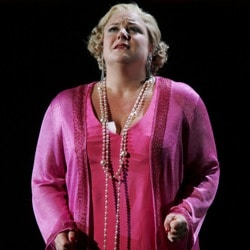 English National Opera has waited until now to mark Mozart’s 250th birthday year rather belatedly with a new production of the timeless classic, The Marriage of Figaro. Whether it was worth the wait is another matter. In a year that saw the hands-down success of David McVicar’s new production for the Royal Opera with two different casts in January and June, director Olivia Fuchs‘ effort around the corner for ENO was always going to face stiff competition.

But given the company’s outstanding reputation for Mozart, such as last year’s knockout La clemenza di Tito, I had hoped for something a little less drab, tired and bizarre than this new Figaro.

It actually starts rather well. Before the overture, three gardeners walk across the stage watering the carnations ‘growing’ around the footlights; nothing new, but rather charming. Then the music begins, and the curtain goes up on a group of maids plucking geese for dinner, below stairs.

Sadly, this early sign that the opera was going to be treated as the domestic comedy it is, was thrown away in favour of random imagery. For instance, the servants’ bedroom walls are decorated with the goose feathers in Act I (perhaps in a Daliesque fashion?). The most peculiar part came in Act 3, where the painting of a horse on the back wall was suddenly animated during the Count’s aria; later it changed into the image of a rose and zoomed in on the petals for the Countess’ aria. And in Act 4, the Almavivas’ garden was replaced by a forest with tree trunks that looked like a cross between Jack and the Beanstalk and Little Shop of Horrors.

There’s a problem, too, with the period and style of the piece. Are we in the late nineteenth or early twentieth century? The Countess’ Act 2 costume suggests the 1920s, but Yannis Thavoris‘s sets and some of Niki Turner‘s other costumes confuse in this respect. It’s a shame, because the opening scenes are quite promising, and even Act 2 has its pluses: we get to see the business going on inside the Countess’ closet very clearly thanks to an imaginative set. But the final acts undermine an intermittently entertaining show.

All of this might not matter had the musical performance been more impressive. Unfortunately, conductor Roland Böer wasn’t able to bring the same lan to his reading of Figaro that he brought to Clemenza last year. From beginning to end, there was a lack of co-ordination both within the orchestra and between stage and pit. Particularly glaring was the Act 4 finale, where the beat was totally lost, undermining the impact of the reconciliation. For my money, Böer’s tempi were also odd at times; turgidly slow in places, too quick for the singers elsewhere. There was a nice character to the string playing quite often, but the brass sounded odd and the overall impact was disappointing.

It’s a problem when the strongest singer in a production of Figaro is the one playing Marcellina, and so it proved here: Diana Montague gave a display of refined Mozartian singing, strong projection and comic acting. Lisa Milne seemed a rather matronly Countess when paired with the overly youthful Mark Stone as Almaviva. There was little chemistry between them, and where Milne’s singing managed pathos (though at the expense of pitch and with too much vibrato at times), Stone’s sobbing rendition of the opera’s closing speech and his bland version of his Act 3 aria (taken at a plodding speed by Ber) drained his character of all plausibility.

Marie Arnet is quite a find as Susanna. Vocally she is very sweet, and she overcame a blandly characterised opening act with beautiful performances of her duet with the Countess in Act 3 and particularly her aria in Act 4. Not so Jonathan Lemalu‘s Figaro, who crucified his solo in the same act with untidy phrasing and an unpleasant tone. In general, too, he seemed rather old for the part, despite being quite young in reality; I wonder why the director chose to make Figaro look older than the Count?

Victoria Simmonds looked the part but undersang as Cherubino, Jonathan Veira brought some life to the show as Bartolo, and Stuart Kale was fun as Basilio. But it’s a shame that Jeremy Sams‘ rather banal and unmusical translation has been brought out again it seemed all the worse when projected on the Coliseum’s new supertitle board.

Figaro is such a great opera that no performance of it is ever really wasted. The audience had quite a good time; but it’s far from vintage ENO Mozart.

More on Jonathan Lemalu
The Marriage of Figaro @ Coliseum, London