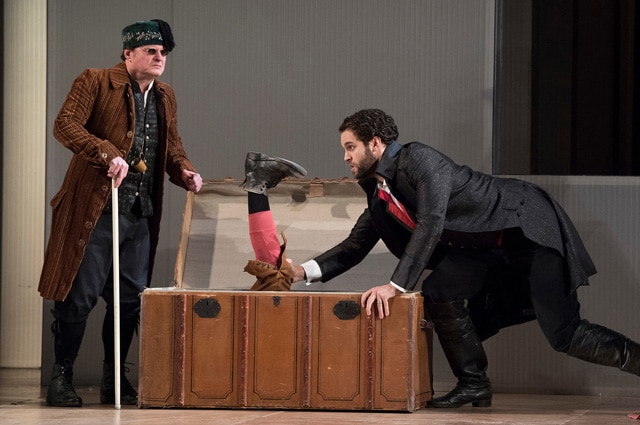 Don Basilio cannot be played by the same person in The Barber of Seville and The Marriage of Figaro because one is a bass, the other a tenor. Dr Bartolo can, and Andrew Shore has done so, appearing in Barber for English National Opera on numerous occasions, and in Figaro for Glyndebourne Festival Opera in 2012. As a rule, however, the person who plays Rosina in Barber is more likely to sing Susanna than continue her previous role by taking on the Countess. Not so Lucy Crowe who appeared in Barber for ENO in 2013 (and incidentally sang Susanna at the Royal Opera House in the same year) and now plays the older, more broken incarnation of the same character.

That Crowe does not knock everyone else into a cocked hat is a tribute to the strength of the rest of the cast, but she certainly stands as the first among equals with both her singing and acting. She demonstrates the underlying cleanness of sound that tends to be a hallmark of her performances, and yet also brings immense richness and vibrancy to her soprano so that during ‘Porgi, amor’, which she sings clinging to a servant’s arm, we see her both as a broken and spiritual figure. Her interaction with others is also superb, as she shows with Susanna how she enjoys the company of a woman with whom she can confide, and with Cherubino how she likes being highly thought of by men. At the end we feel she forgives the Count because she would love him to be faithful, but has little confidence that he will be. As she walks away, we sense things will be as they were before, and that she will have to content herself with having the admiration of Cherubino.

This is the second revival of Fiona Shaw’s 2011 production for ENO (Peter Relton is now at the helm), and it is one that shows many more strengths than weaknesses. Shaw decided that Figaro could not be set in the modern day, as would have been her natural preference, because the droit de seigneur was simply too alien a concept. She therefore decided to represent the Count’s house where the action takes place as a maze, within which people can physically and symbolically become lost. Courtesy of Peter McIntosh’s revolving set, we really feel as if activity occurs constantly throughout this aristocratic residence as we see servants mopping corridors, or cleaning scythes as they hint at the troubles that lie ahead. It certainly creates a dynamic set-up so that when Susanna and Marcellina trade insults in ‘Via, resti servita, madama brillante’ (although you won’t hear those words in Jeremy Sams’ exceptionally smooth and witty translation), they go on a tour of the house as the set rotates. 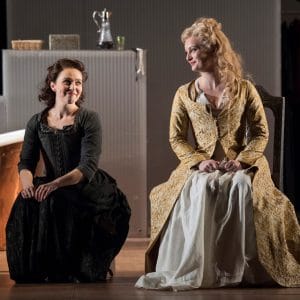 The concept, however, is not entirely without its problems. Shaw suggests that mazes were intrinsically eighteenth century, but in reality the net result of the stage being dominated by bleached white walls is that the action feels somewhat devoid of context. There are also times when the production trips over itself with its cleverness. The music teacher Don Basilio is made blind, which has a nice impact on the scene where Cherubino and the Count end up hiding. The latter does not really need to obscure himself at all, and at one point is able to sneak out of the room, which emphasises how his subsequent decision to remain derives from his desire to hear what Don Basilio is saying. However, in the process, he does not hide in the place that matches the description of what happened that is provided after the event. Similarly, because the set can rotate so quickly it means that Antonio does not have to appear in the Countess’ apartment, in which a gardener would never have been permitted, at the end of Act II. However, the libretto covers the point anyway when Figaro asks what the ‘drunkard’ is even doing in here.

Many other moments work very well, and there is undoubtedly an exquisite attention to detail. For example, just before Cherubino jumps through the window in Act II he drops his commission and picks it up again, which is an excellent way of refreshing the audience’s memory on exactly where this important document is. Symbolically, the Count is the Minotaur at the centre of the maze who devours women, and so Figaro, as the Barber of Seville, puts his razor to a horned skull as an indication of what he would like to do.

‘Non più andrai’ is especially effective as with every line Figaro sings the Count gloats and Cherubino trembles, with neither appreciating that the character has his own agenda that renders both of their reactions ‘incorrect’. Similarly, the numerous trips, slips and falls that this production features are slickly managed, while the lower walls of Acts III and IV help to bring the set and production into check, and make the second half feel more effective.

Martyn Brabbins’ conducting is well balanced, while the excellent cast really develops as the evening wears on. All are strong as individuals from the start but it sometimes feels as if each character reacts to the others as they know they should, rather than by having built up genuine rapport. This difficulty may be overcome as the run continues, however, and it certainly is as the evening progresses and everyone succeeds in generating chemistry.

It almost seems like a rite of passage for sopranos nearing the end of their time as an ENO Harewood Artist to take on the role of Susanna in this production, with Mary Bevan singing it in 2014 and Rhian Lois doing so now. Lois has presence and a very pleasing manner, and her sweet singing grows over the evening to generate an extremely well rounded sound. Thomas Oliemans as Figaro proves quite a find on his ENO debut as his voice reveals an excellent shape and timbre, and his acting conveys just the right level of ‘swagger’ in the loveable trickster. Katie Coventry as Cherubino sings ‘Voi che sapete’ well, gearing her expressions to the context in which the aria is sung, while also enabling it to shine as a beautiful piece in its own right.

Ashley Riches is a convincing Count, revealing his strong bass-baritone and oscillating between asserting himself as the dictatorial ogre and the man who, at least on occasions, would like to believe that his charm rather than position can win him the women. Janis Kelly and Keel Watson are class acts as Marcellina and Bartolo respectively, and it is amusing to see how when they realise they are Figaro’s parents she reveals a motherly love while he displays rather more bewilderment. Colin Judson and Paul Sheehan respectively play Don Basilio and Antonio very convincingly, while Alison Rose as Barbarina sings ‘L’ho perduta, me meschina’ extremely beautifully.

• Details of the 2020 revival of this production at ENO can be found at eno.org