Director Oliver Platt brought Don Giovanni to Holland Park in 2017 and Così fan tutte a year later, but no one could have foreseen the circumstances under which he would end up staging Figaro. 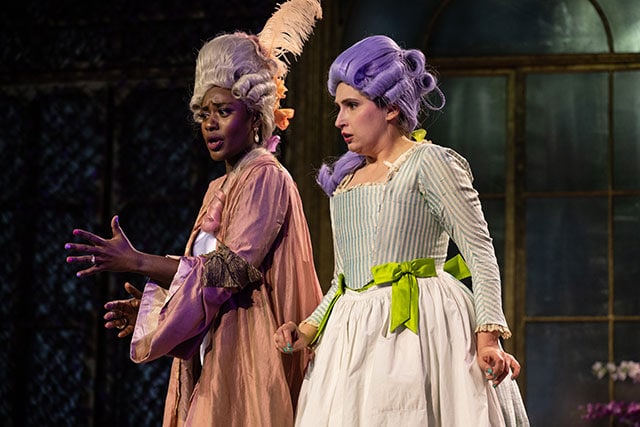 Opera Holland Park last performed The Marriage of Figaro in 2011. Since then it has enjoyed two productions of Così fan tutte and one of Don Giovanni, but, because of COVID-19, its first staging of the initial Mozart / Da Ponte collaboration in a decade takes place in quite different circumstances to any previously known. In the event, this highly dynamic production is presented over quite a large geographical area, as some scenes occur in front of the orchestra and some behind it, yet still feels very intimate.

In Oliver Platt’s new production, takis, who this year has reimagined the entire stage and auditorium that lies beneath the venue’s canopied roof, is the set and costume designer. The credits fully acknowledge that he has applied the design onto Cordelia Chisholm’s set for OHP’s current production of La traviata, where a sumptuous cylindrical room lies at one end. A colonnade of arches runs out from this, which on this occasion can be pulled tight against, or away from, a wall adorned with flowers that lies behind it, and which itself contains doors.

A gangway then runs around and in front of the orchestra, and this is where the Act I action occurs. Two topiaried bushes lie in pots (Figaro dances with one during ‘Se vuol ballare signor contino’) suggesting the setting is a garden, rather than Figaro and Susanna’s bedroom. This works, however, because Figaro calculates whether his bed will fit the space in question from a plan that he holds, rather than with a measuring tape. The drama from the outset feels very immediate, and throughout the evening figures are seen emerging through the doors at the back and acting in character before they actually appear in the scene. When Susanna leaves Figaro at the end of their first encounter, a servant appears to indicate that the Countess has actually called her.

There are a host of lovely touches so that Dr Bartolo is in full flight in ‘La vendetta’ when Marcellina simply offers him a sweet, with the bag of goodies then constituting the visual focus for the remainder of the aria. Susanna and Marcellina’s trading of insults in ‘Via resti servita, madama brillante’ ends with a chair and large blanket being placed centre-stage in front of the orchestra so that the action can be propelled forward without pause as the props required for the Count and Cherubino’s subsequent hiding escapades are already in place. Owing to some very slick design and direction, Cherubino ‘disappears’ while hiding to reemerge under the floor on the other side of the stage. Then four chorus members march on during ‘Non più andra’ to hand Cherubino the various parts of his uniform and reenact a battle scene by hiding behind the chair. 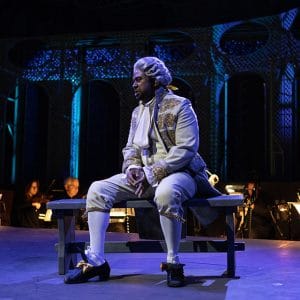 Following these antics, the mood changes entirely as a curtain rolls back on the cylindrical room to reveal the Countess sitting sorrowfully at her dressing table. Nardus Williams then proceeds to give an extremely moving performance of ‘Porgi, amor, qualche ristoro’ as her rich soprano imbues every line with the right level of sorrow and dignity. As a whole, however, Act II does not feel quite as impactful as Act I because, after the immediacy of the action in front of the orchestra, suddenly the characters are a lot further away behind it. Samantha Price reveals an excellent mezzo-soprano as Cherubino (she has also played the part for English National Opera), and her timing is spot on, but ‘Voi che sapete che cosa è amor’ is let down by the direction. This is the one moment when Cherubino can reveal that there are deep thoughts and feelings beneath the playful exterior and, though the start of the aria allows for this, the end cheapens what he espouses as the youth clutches an object like a microphone as if he is singing karaoke. There are some moments of brilliance so that when the Countess and Cherubino gaze at each other before he has to hide, it is impossible to imagine that she does not have feelings for him, but overall all of the coming and goings in this act are squeezed into too small a space. Still, the final septet is rendered dynamically as the characters venture beyond this restricted area in moves that remind us that the central battle remains between Susanna and the Count.

The moments that hit the mark, however, far outweigh those that miss it, and there are some brilliant ones in Act III. The characters wear traditional costume, but just a few nods are given to the present day. For example, social distancing makes it difficult for Susanna to get the wrong end of the stick when seeing Marcellina and Figaro embrace, but as Marcellina is clearly thinking ‘Can I or can’t I give him a hug?’ Figaro rolls up his sleeve to show he has had his jab. Then, after the misunderstanding has been cleared up, Marcellina, Bartolo, Susanna and Figaro all participate in a selfie. The dancing after the wedding makes for one of the most effective moments of the evening. It feels virtually in slow motion, but possesses a bite that makes the intrigue in the air seem tangible, and also suggests that every member of the household is constantly engaged in private games of this sort. The ending is also interesting in that it generally feels ‘traditional’, but introduces a single prop that implies things will never be the same again.

Ross Ramgobin has a pleasing baritone and nice swagger as Figaro, while Elizabeth Karani as Susanna reveals a beautiful soprano and some astutely observed gestures. Julien Van Mellaerts demonstrates an excellent baritone and makes the Count feel bullish enough, without ever reducing him to a two-dimensional ogre. There is strong support from Victoria Simmonds as Marcellina, James Cleverton as Dr Bartolo, Daniel Norman as Don Basilio (and Don Curzio) and Claire Lees as Barbarina, while it is interesting to see how Henry Grant Kerswell, who also played Antonio in Liam Steel’s production here in 2011, has adjusted his portrayal of the gardener to suit the different set-up. In the pit, George Jackson extracts sprightly and intelligent playing from the City of London Sinfonia, which performs Jonathan Lyness’ reduced orchestration.

Above all, this production never lets us forget the most obvious point, though it is one that can easily be missed in poorly focused presentations, that all Figaro and Susanna really want to do is get on and get married. On the night I attended the heavens may have opened, but with such first rate entertainment taking place under Opera Holland Park’s canopied roof, it was not enough to dampen anyone’s spirits.

The performance at 2.00pm on 20 June is a Discovery Matinee and Relaxed Performance.