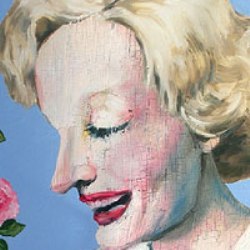 On a sweltering summer day, in a venue full of children and crowing peacocks, Holland Park seemed an unlikely place to watch the events at the Pontevedrian embassy unfold.

However, a stunning set, superb orchestra and striking cast made the antics of our merry widow credible and utterly delightful.

As with all outdoor events, the audio quality is not as crisp as in an opera house, but this does not detract from the outstanding production from this company.

After Lesley Garrett’s efforts as the widow with the WNO last year, it was interesting to see Rebecca Caine’s take on the comic heroine. A fine and clear voice worked well in the popular Vilja and this was by far her best aria. Her talents as a singer matched a fading Garrett but she did lack the busty, Yorkshire charm that the WNO utilised to the full. Caines singing is her strongpoint and through this she conveyed all the wit and charming self-confidence of the character.

Similarly, Philip Salmon as the tenor Count Danilo Danilowitch cannot be faulted for his talents as a singer. He gave a powerful and very confident voice to the Count, but his acting at times was a little gratuitous and grating. The slime and arrogance of Danilo was definitely there but sometimes in too high a volume for comfort, and at times there was very little comic value in his performance. He did, however, excel in the duet Love Unspoken with Caine.

The Merry Widow is an interesting operetta because behind the brilliant comedy there is an extreme exploration of gender politics and socio-economics. The concept of a state attempting to systematically seduce a wealthy widow for their own financial security is shocking. The oppression of women by their husbands and the promiscuity of the men and women is controversial stuff, but what does this matter when we have all the great comedy of the music and libretto?! The slapstick dramatic irony of Baron Mirko Zeta and his misguided faith in his wife’s fidelity is hilarious. Ian Caddy plays the part well and, with his onstage partner Charlotte Page as Valencienne, funny and beautiful theatrical moments are made. Page reveals much talent in this show, with A Highly Respectable Wife being full of passion and subtle humour.

The producers and designers made a very good choice in setting the production in 1920s Paris. The Art-deco set and mixture of post-Edwardian and flapper styles work brilliantly and are stunning to see. The set is obviously very simple but it still functions well and the costumes give a chance for the widow to glam it up. The great costumes also look stunning on the Grisettes of Chez Maxim, and as a group these girls are good singers, good dancers and all round, good looking! Eh, voila les belles Grisettes was a hit on the stage and with the audience.

In an operetta like this there has to be a real relationship between the orchestra and the singers. Conductor John Owen Edwards had excellent control over the musicians and he seemed to enjoy every minute of the production. The orchestra seemed to be enjoying themselves too and there was a genuine and energetic interaction between Edwards, the stage and the audience.

Opera Holland Park has a varied and, in some respects, very intense season this year but to lighten the mood and to pull the punters they have made a wise choice in the Widow. A brilliant ensemble, competent production and perfect musical talent has to make this a key artistic feature of summer in London 2006.