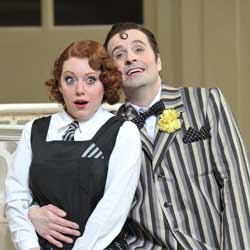 Twenty years on, Jonathan Miller’s production of The Mikado remains witty and diverting. It’s without a doubt the greatest of the Savoy operas by WS Gilbert and Sir Arthur Sullivan, containing several great songs, some serviceable set pieces, and more social satire than they would achieve elsewhere.

On the other hand, even The Mikado has its flaws. It begins to drag on a bit in the second half when the plot resolution is obvious but its execution (no pun intended) overlong. And after more than two and a half hours of recitative and arias chez Sullivan, one was glad to have reached the end, however enjoyable the performance on the whole.

Jonathan Miller updates his production to the 1920s, and Stefanos Lazaridis‘ single set evokes a chic salon of the period, with cream walls, floor and grand piano. Sue Blane‘s costumes are mainly in whites and creams, with splashes of contrasting black here and there, and it all looks superb in this revival by director David Ritch.

The operetta succeeds on the whole because of Gilbert’s witty libretto, which is hilarious even today, and Miller’s updating makes it seem the more ironic. Society and the class system is one of the work’s main preoccupations of course, so when different areas of the theatre were pointed to at one point, it was a knowing comment on the way that the different pricing in the stalls, circle and balcony divides the audience up into social groups. Ko-Ko’s famous List Song continued this theme, with allusions to everything from the surtitles and the management at ENO to Charles Kennedy, Mark Oaten and Celebrity Big Brother.

There are many great songs in the piece, and the cast throws plenty of energy into it, but it’s frequently at the expense of vocal quality and communication of the words (roll on surtitles, I say). Company Principal Sarah Tynan was in splendid voice as Yum-Yum, bringing the musical highlight in a crystal clear rendition of The Sun Whose Rays. Her suitor, Nanki-Poo, was Keith Jameson, whose combination of light lyric tenor and good projection made his performance satisfying from his opening aria A Wand’ring Minstrel to the very end.

While Richard Suart was side-splitting as Ko-Ko, it was clear that he would have benefited from amplification (which he was given, briefly, for the List Song). The same goes for Richard Angas‘ deliciously oversized but thin-voiced Mikado. Ian Caddy was slightly too self-effacing as Pooh-Bah, but his voice was expressive enough.

Felicity Palmer as Katisha was alone in singing with a full tone, and she was a highly amusing presence onstage. She was superb in The Camelites earlier in the season, and I’m delighted to read of her forthcoming appearances at the ROH in Katya Kabanova and La fille du Regiment.

Simon Lee brought some beautiful sounds out of the orchestra, with the overture particularly evocative of a clash of Western and Eastern cultures. I wasn’t keen on Anthony van Laast‘s choreography, especially the tap dancing which drowned out the singing in the stretta or fast passages in the two act finales.

Nevertheless, the production lives up to its reputation, Palmer is a treat, and Gilbert’s wit makes the journey worthwhile.