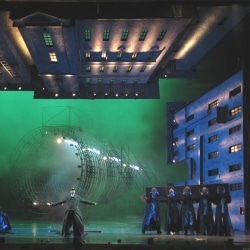 Of all Shostakovich’s compositions, The Nose is surely the closest he came to committing outright musical rebellion.

In choosing to adapt NikolayGogol’s tale for the stage he took a piece of satire head-on, free tochallenge coventions of form and voice.

This he did with music that taxedvocal and instrumental registers to the limit, producing some truly weirdand wonderful textures and sounds.

He also ensures that the entire opera seems topass without repetition of ideas, with little or no thematicdevelopment.

Gogol’s story is pure farce. Platon Kuzmich Kovalev, a collegiateassessor, wakes up one morning without his nose, which has taken flight anda mind of its own. Rather than feeling pain at his loss, Kovalev seems moredistressed at the social problems this is going to bring. When he finds theNose in the Kazan Cathedral it already outranks him, now equivalent to anarmy brigadier. In an increasingly bizarre and fantastic plot developmentthe Nose causes riots wherever it goes, tracked down to shopping centres andfinally cornered by the police. Though eventually returned to its rightfulowner, the Nose continues to cause no end of trouble to the story’s end.

In bringing this to life Shostakovich’s music is thrilling in its wildunpredictability, and in Valery Gergiev he has the ideal advocate. Theconductor’s arms are briefly visible above the pit as he flings themskyward, coaxing a raucous bassoon here or a shrill wind instrument there.The Kirov’s sound is raw, but the instrumentalists, virtuosic as they are,are second fiddle to a dazzling array of vocal talent.

As the main character, Vladislav Sulimsky is superbly vain, anddoes a nice line in self-pity. The Nose itself is played by two people.Sometimes it appears in dance form, a man wrapped from top to toe in anelastic white sheet who proceeds to perform disturbing, abstract moves, andin vocal form through the full-bodied tenor of Avgust Amonov, whoagain rather chillingly appears to have been dressed as Dracula.

Shostakovich’s demands on his singers are famously fiendish, and nonemore than the highest of high Es assigned to the district constable in hisfamous Act One entry. This is supremely accomplished by Andrei Popov,who continues to give a piercing vocal delivery along with a humourous stagemanner totally in keeping with the idiom. It comes as no surprise to reportthat in the supporting Kirov cast there are also many wonderful things,chiefly from Larissa Shevchenko as a staff-officer’s wife, andTatiana Pavlovskaya as her daughter. As Kovalev’s footman, SergeySkorokhodov makes an impact in Act Three as a tenor of somedistinction.

The staging is stunning and completely gripping. A large cylindricalconstruction, put to good use as the cathedral in Act One, becomes a bus inact three. Vivid lighting and various incendiary effects ensure the lastounce of madness is wrung from the story, and with Gergiev at the helm theresults are never less than thrilling. Catch them while they’re still here The Nose may be done, but there are other pieces in which to enjoy thesesupremely talented performers.