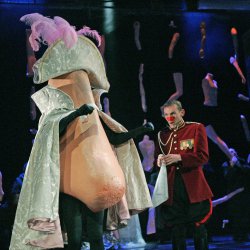 The Opera Group’s production of Shostakovich’s The Nose at the Linbury Studio, Covent Garden is a worthy alternative to the big Russian companies currently taking London by storm. With the Bolshoi in residence this week on Covent Garden’s main stage and the Kirov down the road at the Coliseum, there may not seem much room for a home-grown opera company to be delving into the Russian repertoire.

However, middle-scale touring company The Opera Group gives the big guns a run for their money with Shostakovich’s early comedy, based on an absurd Gogol novella.

It’s a run that resembles a Keystone Cops caper much of the time, as John Fulljames‘s witty and inventive production takes every opportunity to squeeze laughs and pathos out of the piece. He really puts his cast through their paces, as they combine a high standard of singing with energetic movement and characterisations.

The Nose is hardly Shostakovich at his most sophisticated or inspired. There is much characteristic use of percussion, which is thrilling to begin with. The vocal lines tend to be turgid, but there is colour and youthful exuberance in the orchestral writing. I wonder how the composer’s style would have developed, had the authorities not clamped down a few years later. Maybe, had he been allowed to develop freely, we would have missed out on the glories of the later works. If his mature style was moulded by the repression of the state, none of that is evident in The Nose, where it seems that, musically and dramatically, anything goes.

The opera tells the story of Platon Kuzmich Kovalyov, who wakes up one day to find that his nose has absconded. He searches town high and low for the appendage, which takes on a life of its own and soon outranks its erstwhile owner. The pace never lets up until Kovalyov has the nose back on his face and life returns to normal.

The frantic score is cleverly arranged for chamber orchestra by Patrick Bailey, who conducts the 16-piece band with great flare. As the despairing anti-Cyrano, Jeremy Huw Williams is very sympathetic. There are memorable turns also from Paul Featherstone as his servant Ivan, Simon Wilding as The Doctor and Alexander Grove as The Nose, although there are no weak links in the fine ensemble.

The designers, Alex Lowde (sets and costumes) and Oliver Fenwick (lighting) deserve mention for their great use of limited resources. The epilogue, Kovalyov reunited with his nose strolling on Nevsky Prospect, is particularly striking in its simplicity. Fulljames’s groupings and use of expressionistic movement is very impressive and, for the most part, well-executed by the cast.

Shostakovich is as ubiquitous as Kovalyov’s nose this year. Everywhere you look, there he is. It’s high time he received this kind of recognition, even though two Noses in one week may seem a little like a London bus schedule (the Kirov gave us their larger-scale version of the opera under Gergiev last week).

Despite the crazy antics palling a little in the middle, this is a hugely enjoyable production from a very talented group of musicians, singers and production team.

The Opera Group MP3s or CDs

The Opera Group on Spotify