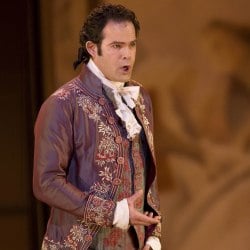 Gerald Finley in The Queen of Spades (Photo: Bill Cooper)

Pushkin’s tale of obsession with money and love provided Tchaikovsky with the perfect basis for his penultimate opera, The Queen of Spades. Fate dominates this opera as it does in other nineteenth-century stage works, particularly Carmen – and it shares something of that masterpiece’s psychological intensity.

By coincidence, Queen of Spades‘s director Francesca Zambello is also taking on the Royal Opera’s new production of Carmen in December, and the first night’s electrifying performance suggested that we could have something special to look forward to.

As for the Tchaikovsky, Zambello seems to understand the aching heart of Russia that lies behind much of the literature and art to come from that country, and she expresses it in this production by setting the opera in perpetual winter. There are moments of light in the opening scene, when children charmingly play in the park. But once the chorus’ umbrellas go up to shield themselves from the thunderstorm, the weather is persistently cold and snowy.

In many ways this is the ideal background for the tale of the psychological disintegration of Gherman, an officer. He sacrifices his love for Liza, ward of the sinister Countess, for the secret of winning at cards. The Countess knows the secret, but dies before revealing it to Gherman, returning to him as a ghost to tell him the secret and to marry Liza. Instead, he ignores Liza and rushes straight to the gaming tables, and loses both his lover and his money. The story ends with Gherman’s suicide, whilst Liza mourns the loss of his life.

A tree on a snow-covered hill overshadows Peter J Davison‘s set for the second half of the evening, abandoning the literal and elegant settings of the first half for a more metaphorical backdrop. This takes a little getting used to, but in the end seems to suit the increasingly raw emotion of the score. Nicky Gillibrand‘s costumes are extraordinarily beautiful, as is Mark McCullough‘s atmospheric lighting, and Vivienne Newport‘s choreography provided an inventive and entertaining realisation of the neo-classical divertissements of Act 2, Scene 1.

But what marked the evening out as special was the musical performance. Russian tenor Vladimir Galouzine‘s Gherman was the best thing I’ve heard since the opening of the season: a well-projected, expressive, giving performance, and it helped that his pronunciation of the language is so natural. Mlada Khudoley was beautiful of voice and person as Liza, full-blooded in attack, and again it was wonderful to hear Russian sung by a native speaker.

For many, the attraction of the revival was the role debut of Gerald Finley as Prince Yeletsky, Liza’s fianc. His phrasing is extremely elegant and he acts the aristocrat to perfection, though he could not really steal the limelight from Galouzine. It was a treat to hear the great Russian mezzo Larissa Diadkova as the ghostly Countess, and company favourites Robin Leggate, Jeremy White and Elizabeth Sikora provided vivid character roles.

But what stood out of the evening was the exceptional conducting of Semyon Bychkov, leading the orchestra and chorus in one of the most lively and secure musical performances of the season so far. His tempi were ideal, the phrasing was lyrical and the drama was taut. What more could one ask for? It was inspirational and memorable.