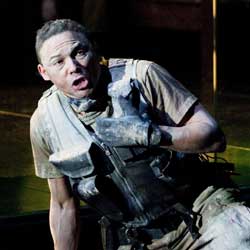 The Return of Ulysses

Monteverdi’s first ‘public’ opera shows us Human Frailty in all its guises, from the vulnerability of a lover to the lack of control over their own destiny shared by most of the characters, and this production, Benedict Andrews’ first for the ENO, emphasizes the fragility of happiness and order. Its not always the greatest idea to import theatre directors to interpret opera, and there are odd moments here when one feels some sympathy for Peter Craven’s notorious description of Andrews as his “nightmare of what director’s theatre can come to”, but overall the production is a triumph, slickly staged, brilliantly acted and (mostly) fabulously sung and played.

You don’t expect much in the way of emotion from this director: his understanding of our common vulnerability is secure, but he subsumes the grand moments of the opera, such as the two recognition scenes, into the greater whole in such a way as to make them seem much more natural than usual – I can still recall, some twelve years on, the visceral reactions of the audience to these scenes at the Barbican Theatre when William Christie presented the Aix version of the work, but at the Young Vic, whilst one is of course moved, there’s no temptation to sneak out the Kleenex.

The ethos will be familiar to anyone acquainted with what might be called the Schaubühne style: it’s direct, spare, uncluttered, raw and brutal, concentrating more on personenregie than is the norm for opera direction, and it works extremely well in the intimate space of the Young Vic, where front row patrons run the risk of being splattered with blood or confetti. The elegant Perspex rectangle which encloses the pocket Yuppie loft apartment is a clever way of allowing us to see all the action, and it serves well in terms of offsetting the gigantic emotions and characters being portrayed. Those emotions were super-sized on two giant video screens – of course.

Pamela Helen Stephen’s Penelope and Ruby Hughes’ Minerva were seen as mirror images although the Goddess only rarely echoed her mortal counterpart’s actions: neither singer possesses a voice of any special individuality or even particular agility, yet both gave terrific portrayals, the former dramatically convincing in her grief and the latter unfailingly commanding. Diana Montague does have an individual voice – I would know it anywhere, and she has stolen every show in which I’ve seen her: the role of Ericlea seemed too brief here, as did that of Eumete in the person of the wonderful Nigel Robson.

Tom Randle cuts a dashing figure as the returning warrior king, even if he’s not quite convincing as the poor old beggar, and he sings with his customary muscularity of tone and directness of manner. If ‘O fortunat’ Ulisse’ did not quite move as it should, that had more to do with stage business than singing. The young tenor Thomas Hobbs made an auspicious ENO debut as Telemachus, and another tenor Thomas, Walker this time, fulfilled the promise he’d shown at the RCM with a vibrantly acted and convincingly sung Eurimaco.

There were no weaknesses in this cast: Iestyn Morris turned in a superb double act as a gently vulnerable Human Frailty and a positively oleaginous Pisandro, Francisco Javier Borda revealed a sonorous Handelian bass as Time and Antinoo, and Katherine Manley sang with clarity and sweetness of tone as Melanto. The pared-down orchestra, featuring instruments such as the lirone and the theorbo, sounded wonderful in this intimate space, and it was superbly managed by Jonathan Cohen, who shaped Monteverdi’s phrases with loving skill.

The killing of the suitors and hangers-on was predictably more violent than usual, but after all it’s in the libretto – Ulysses doesnt just send them away with a handshake, he actually slaughters them, so all that blood and point-blank picking off seemed logical rather than gratuitous. The final recognition scene did not tug at the heart-strings as it usually does, but if it had, it would not have been in keeping with this production’s overall style, which was to emphasize our lack of control over our fate and our tentative grasp of how to manage both misery and fulfilment.