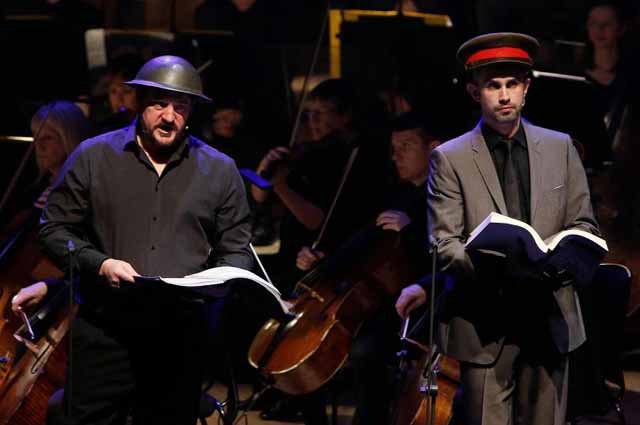 Mark-Anthony Turnage’s The Silver Tassie, based on Seán O’Casey’s eponymous play, was written between 1997 and 1999 and premiered at English National Opera in 2000. It was extremely well received, winning South Bank Show and Laurence Olivier Awards, but in spite of this and performances by Opera Ireland in 2001, it has not been seen since its first ENO revival in 2002. There could, however, be no better time to be reminded of just how poignant this opera, which rightly deserves the title of ‘modern masterpiece’, is than on the centenary of the end of the First World War.

Librettist Amanda Holden works from O’Casey’s text, albeit cutting around two thirds of it, while Turnage’s composition ensures that this is an opera that both respects and enhances its source. For example, O’Casey’s Act II left the central protagonists to explore the cynicism and despair of the common soldier in what is seen as an experiment with expressionist and symbolic theatre. Turnage writes this, and all of the other play’s changes in tone, mood and tempo, into his own composition by interpreting the four acts in the same way as the four movements of a symphony.

In Kenneth Richardson’s concert staging, the soloists wore costumes while several props were employed, not least the wheelchair to which Harry is confined following his injuries in battle. Nevertheless, the act of placing them at the front of the stage singing outwards (although they also interacted a lot with each other) gave their words a greater immediacy and poignancy. In Act I, this helped bring home much of the rawness of the language and, by extension, the situation as a whole. For example, Harry sings of raping a ‘gorgeous virgin’ as he is about to head to the front. It is clear he is simply letting off steam, rather than declaring a serious intent, but when today we are likely to suggest that such a thing should not even be joked about, it does highlight the stresses that the soldiers were being put under that their talk should become so rough.

Act II came across particularly well, as the men of the BBC Singers and the Finchley Children’s Music Group formed the double choir of soldiers, with Turnage having included a children’s chorus to emphasise just how young the generation that served at the front really was. The repetition of lines helped us to read multiple meanings into them so that the assertion that they might die in the middle or at the start of November allowed us to apply retrospective judgements regarding when the First World War ended and when Wilfred Owen was killed. Similarly, the way in which one soldier could state the precise number of days and hours they had been there and another could simply utter (after hearing this) that it was nearly thirty days showed the way in which different minds respond to pressure by either sharpening up to everything or switching off as a way of coping. This scene also included Brindley Sherratt (replacing an indisposed Sir John Tomlinson), who sang from behind the orchestra, and brought every inch of vocal brilliance to The Croucher that he recently did to the role of Fafner at the Royal Opera House.

Acts III and IV saw Harry in his wheelchair as Ashley Riches, with a tremendous bass-baritone that revealed both broadness and sensitivity, brought out to the full the sorrow, frustration and anger that flowed from his injury and everything that this affected. Marcus Farnsworth was also highly convincing as Teddy so that, even though we saw his brutality towards the start, we still could not help but feel sorry for him as we saw what he was reduced to after being blinded.

Turnage has described treating Act IV as a dance finale, like the final movement of a symphony, and here it was presented perfectly. Projections of flowers and balloons on the walls of the stage conveyed a sense of the dance hall, but these disappeared, as if the balloons were burst, when gunshots sounded. The ending also left a bad taste in the mouth, as it should do, because it is one thing to say that those who do survive have to learn to live again. It is another to carry on while turning one’s back on those who made the sacrifices, and so the sight of the injured huddled in the corner as the epilogue was sung was extremely poignant.

Ryan Wigglesworth’s conducting of the BBC Symphony Orchestra left no effect or nuance in Turnage’s enigmatic score unexplored, while from among the supporting cast the performances of Sally Matthews as Susie, Alexander Robin Baker as Barney, Louise Alder as Jessie, Susan Bickley as Mrs Heegan and Mark le Brocq as Sylvester all stood out.