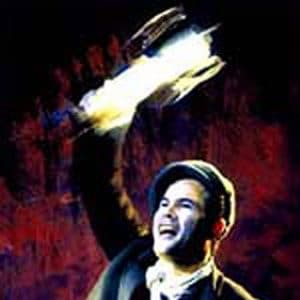 After all the hype (including a CD of ‘highlights’ sent to ticket holders in advance) this World premiere was eagerly awaited but, perhaps inevitably, a disappointment. Turnage has been influenced by Britten but says that he tries to avoid anything that would seem too much like a reference. It might be more interesting musically if he allowed himself that liberty.

His first full-scale opera, The Silver Tassie is based on a Sean O’Casey anti-war play and although there are some powerful moments, they are all too few. The hero is Harry Heegan, a good Dublin lad who in 1915 brings home the eponymous tassie – a football trophy – during leave from the trenches.

The riotous first act is splendidly set in a tenement building: excellent design and lighting gives a real feeling of cheek-by-jowl living, and both the comfort and the irritation of neighbours. Harry’s elderly father is a particularly vivid character, beautifully brought to life by John Graham-Hall.

When the men are called back to the war the scene changes to the trenches, and this is where the opera fails: what should be a very moving act is somehow flat. Despite mud, bodies and a vast gun emplacement, the horror and despair just doesn’t come across – the ENO male chorus sing beautifully, but never convince us that they are anywhere but on stage. Gwynne Howell is a velvet-voiced ‘Croucher’, perched up by the gun singing ironically as a prophet of doom. Is he already dead? Hard to tell, though sitting up above the parapet he certainly should be…

Harry is paralysed from the waist down, and his neighbour Teddy blinded, when we see them next, in hospital. Harry’s girlfriend deserts him for his (able bodied) best friend and the remainder of the piece contrasts Harry’s current pitiful state with his former glory as the sports hero bringing home the cup. The only truly moving music comes in a short (all too short) duet for Harry and Teddy when they sing of their loss and despair, at the football club dance in 1919.

The medium of opera should add an element to the narrative. Unfortunately, the Siegfried Sassoon poem published in the programme is infinitely more moving than the opera – so in my book, Turnage has failed.

Gerald Finley – a vigorous Canadian baritone with wonderful voice and stage presence – is superb as Harry both in the riotous first act and when skilfully manhandling his wheelchair. In fact all the singing is fine. It’s just a shame there isn’t something better for the cast to sing.