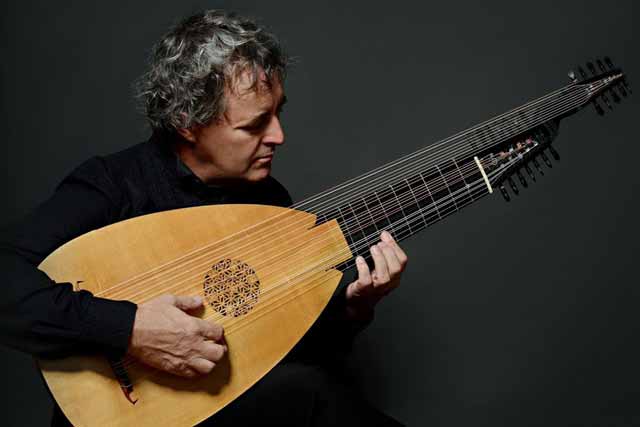 This concert by The Sixteen showed that it is slightly easier to divide two halves of an evening (broadly) between the religious and the secular, than it is to divide the output of William Byrd and John Dowland along those same lines. All of Byrd’s pieces came from his Psalmes, Songs, and Sonnets, compiled in 1611 though some may have been written decades earlier, while most of Dowland’s compositions were produced in 1612. With the exception of just a few of Byrd’s works that were clustered together, and two instrumental pieces by Dowland that were played consecutively, this recital alternated between single creations by each of the two composers.

Dowland’s lute songs were usually printed together on the same page in versions for solo singer and lute and for vocal or viol consort. This concert mirrored his notions of flexibility in this respect by performing all of the evening’s pieces in one of four ways. There were those by Byrd that were sung by the entire (or nearly the whole) choir a cappella, and those where the lute, played by David Miller, accompanied the voices. Regarding those by Dowland there were those that involved solo voice and lute, and just occasionally the full choir as well, and some purely instrumental pieces.

Many parts of this concert showed The Sixteen at its very best, with the performances of Byrd’s ‘Crowned with flowers’ and ‘Turn our captivity, O Lord’, among others, revealing the choir’s ability to blend its voices to create a clear, smooth and, above all, beautiful sound. For example, ‘Retire, my soul’, which began the evening, saw the most translucent sound produced on the final word ‘fables’. There were a few moments that went off the boil, however, and it did not help that it was difficult to hear the lute when it accompanied the full choir. In such instances, the sound of its final few notes coming through loud and clear as the singers finished was quite moving in its own right, but should not really have been the effect that was achieved.

It was in some of the most complex music that The Sixteen really excelled, probably because it invited the greatest scope for conductor Harry Christophers to shape the music, with the choir responding magnificently. In this respect, Byrd’s ‘This day Christ was born’ was beautifully performed as the staggered proclamations of ‘rejoice’ really felt as if they rippled through the ‘ranks’. The composer’s ‘Sing we merrily’ also saw the choir give a fanfare-like glow to the proclamation of ‘trumpet’.

Miller performed Dowland’s Preludium and The Frog Galliard, demonstrating nimbleness alongside delicacy and thoughtfulness so that the listener was truly drawn in. He also explained that the Preludium is one of the few cases where the manuscript in Dowland’s own hand survives, meaning it carries the advantage of us knowing his original ornamentations and right hand fingerings.

There were some lovely solos with the lute, with Katy Hill revealing a very sweet soprano in Dowland’s ‘Disdain me still, that I may ever love’ and Ben Davies a warm bass in his ‘Welcome black night / Cease these false sports’. In a few instances it did not feel as if the singers captured the words and hence meaning of the song entirely appropriately, but two to whom this point would certainly not apply were Julie Cooper in ‘Sweet stay awhile’ and Eamonn Dougan in ‘Shall I strive with words to move’ who both gave extremely emotional performances without indulging in histrionics.

Restraint would, in fact, seem to have been the watchword of the evening. It enabled the brilliance of the performers to come across clearly in many places, and to show that Dowland can work when presented in an understated and extremely controlled manner. It is, however, questionable, given the singers’ overall approach, whether it was worth devoting half of the evening to that composer. Nevertheless, although The Sixteen may generally have excelled more in the Byrd pieces, this should not detract from the fact that many people performed at the height of their game for a significant proportion of the evening.

For details of all of The Sixteen’s recordings and upcoming events visit the designated website.