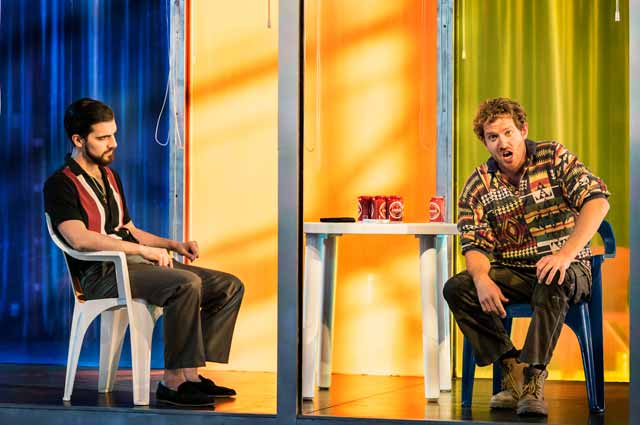 In storytelling terminology, a thriller is a piece in which the audience is led to believe that one thing is the case, when in reality it is another. Far more films, plays and novels are thrillers than operas, but Die Zauberflöte, Bluebeard’s Castle and now The Skating Rink would fall under that category.

Composer David Sawer and librettist Rory Mullarkey’s new creation, which was specifically commissioned by Garsington Opera where it now enjoys its world premiere, is based upon Roberto Bolaño’s novel. Set in the early 1990s in a small seaside town on the Costa Brava, it initially appears as if it will focus on one person. This is Gaspar, a young Mexican aspiring poet who works as a night watchman at the Stella Maris campsite. At the start, he is forced to evict two homeless women, Carmen and Caridad, even though they are doing no harm and he has grown quite attached to the latter. When he subsequently follows them he ends up at the dilapidated Palacio Benvingut. There he discovers a skating rink in the basement where a young figure skater Nuria is practising, overseen by an older man, Enric.

Act II, however, goes back and tells the same story from the perspective of Gaspar’s boss at the campsite, the businessman Remo Moran. It transpires that pressure from Enric, the town’s head of social services, to ‘clean up the town’ led him to instruct Gaspar to evict Carmen and Caridad. This act explores Remo’s own relationship with Nuria, which becomes increasingly difficult, and ends with him finding Carmen’s murdered body on the skating rink.

Act III then tells the story from Enric’s perspective. He is obsessed with Nuria and so when she tells him that, with her government funding withdrawn and nowhere to practise, she will never make it as a champion skater, he constructs the rink for her. He hopes he has covered his tracks so that his embezzlement of public funds will not be detected, at least until he can formally open the rink and see it make money. However, Carmen, who stumbled upon the secret ice rink while looking for somewhere to squat, attempts to blackmail him. He is publicly accused of her murder by Remo at the Socialist Mayor Pilar’s pre-election disco, but, as we soon discover, all is not as it seems. 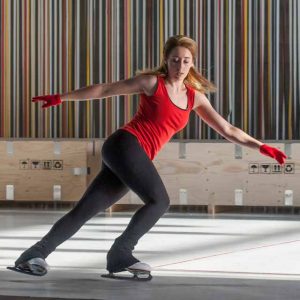 With its blazing sunshine, there could not have been a more appropriate day for the premiere of this work, as it captured the ambience of late summer in Spain while alluding to the metaphorical temperature of the scenario. For example, Gaspar attempting to follow Carmen and then Caridad through the town has the same feel as the 1959 film version of Tennessee Williams’ Suddenly, Last Summer, in which the heat and the crowds clearly tell us there is danger looming, long before we specifically know what the threat is. Stewart Laing’s production makes use of Garsington’s space well, with the light flooding in from outside, characters coming through the auditorium, and the set extending beyond the confines of the theatre so that the campsite’s tents are clearly visible next to the opera garden.

There is real skating, courtesy of Alice Poggio who plays the silent version of Nuria, on a form of rubber membrane. Although this requires no ice, the scenes that feature the rink see it apparently ‘pumped in’ as an effect that also helps us to feel that the temperature has dropped.

Sawer’s intriguing score, excellently conducted by Garry Walker, shows many nods to Britten, and a few to Birtwistle, but also reveals a wide variety of influences as it includes such things as Spanish guitar. Mullarkey’s libretto includes the technique of frequently repeating lines, or parts of them, to emphasise the points, while the rather straight forward use of language within metaphors is effective. For example, when Remo first finds Carmen’s body he describes her blood as ‘red hot gore’ but this then becomes a ‘black sea’, while later it is described as ‘freezing’, which it would become on the ice.

As the story is repeatedly told from different perspectives, it is clever to see how the same scenes are played out again. We see Carmen and Caridad evicted three times from the campsite, and each time a camper does the same actions with a ball while Carmen drops a carrier bag bearing a ‘Marlboro’ logo. When Remo and Nuria emerge from a swim and meet Enric, Remo describes in his story how he could see Enric’s brain go into overdrive behind his apparently cool face. During the same occurrence in Enric’s story, however, Enric describes what he was thinking in similar terms, but says that his face gave nothing away. When the Coda that follows Act III finally reveals the mystery, it seems safe to say that very few in the audience would have worked it out. Just as interesting, however, is who in the end actually gets what they wanted. Though there was misfortune along the way, Gaspar and Enric arguably achieve their overall desires, while it is left to Remo to lament the coldness of the world alone.

Grant Doyle, replacing an ailing Neal Davies as Enric for all performances, really grows in stature as the evening progresses as his expansive baritone comes into play to carry off the largest role with aplomb. Ben Edquist’s rich baritone as Remo contrasts well with Sam Furness’ ringing tenor as Gaspar, while Susan Bickley, with her excellent mezzo-soprano, gives a priceless performance as the homeless former opera singer Carmen. Lauren Zolezzi also brings her beautiful soprano to bear as the singing incarnation of Nuria, while Alan Oke’s tenor stands out in the role of Carmen’s lover, Rookie.

Opening night’s performance was recorded for a future broadcast on BBC Radio 3 (unspecified at the time of writing).