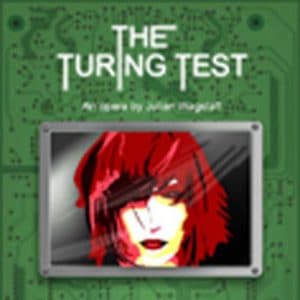 With no new operas being presented at the Edinburgh International Festival this year, eager opera-goers were left to the Fringe and Julian Wagstaff‘s The Turing Test, a tale of lies, lust and science set in the white-hot world of contemporary artificial intelligence research. Marriages of science and art are rarely successful, John Adams‘ recent Doctor Atomic notwithstanding, but Wagstaff knows of what he preaches.

His background in computing and translation seems uniquely suited to his tale of nefarious goings-on in the backrooms of academia, and The Turing Test is a lean delight from start to finish. Ostensibly the tale of an attempt to solve The Turing Test – one of artificial intelligence’s greatest challenges in its quest to make machines in the mould of humanity – the opera manages to cram a lot into its 65 minute running time. It begins with two professors circling each other like caged lions; the two men, formerly fellow students but now rivals in their middle age, represent opposite poles of academic science. Anton Milotovic is the media-friendly master of the soundbite, a naturalised American dressed in distinctive but glaring white suits, while Colin Trevelyan is the typical backroom boffin, tweedy, troubled, and rather too fond of his hip flask.

Jealous of his former friend’s success and worried of his own spiral into the embrace of the bottle, Trevelyan determines to beat Milotovic and develop a computer intelligence that will pass the Turing Test first. Into his obsession he drags his research student, Stephanie, his lab assistant, Ferdinand, and under pressure the two collude to give Trevelyan exactly what he wants: LUCIE, a homely if imperfect AI. Only Milotovic stands in his way: and while he’s become rather enamoured of Stephanie, what is the truth of his wife’s past history with Trevelyan? Everything comes to a head when Trevelyan presents his research at a major international conference…

Dramatically, this is a sophisticated opera: it is to Wagstaff’s credit that he manages to subtly subvert our perceptions of both Trevelyan and Milotovic as the play progresses, until we’re not really sure whom we should be rooting for. Christopher Neil‘s direction allows for some gentle fun for both science-fiction and opera fans: while LUCIE’s first sentient thoughts echo the riff used to make contact in Close Encounters, Ferdinand and Stephanie’s hijacking of the AI is reminiscent of Cyrano De Bergerac.

Although a young group, the Edinburgh Studio Opera acquit themselves adequately; as Milotovic and Trevelyan respectively, Maximilian Fuhrig and Julian Guidera are at times muffled, and it is left to Linda Robertson as Stephanie and Barry McAleer as Ferdinand to provide the evening’s most memorable moments. McAleer in particular seemed to be enjoying himself immensely, and his performance as the lovable, underachieving Ferdinand was a delight. Wagstaff’s score was sparse yet often lyrical, the only criticism being that it at times overwhelmed the principals. Yet overall this was a light and witty contemporary opera that managed to touch on some very weighty matters without ever getting bogged down in exposition. For, as any fan of science-fiction will tell you, you should never let the science overwhelm the fiction.