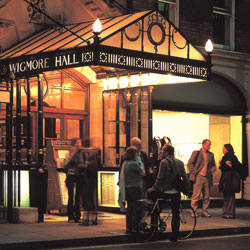 What, no Lied of Honour?

All shall have prizes is not perhaps the best way to think of a competition result, but this time around the judges managed it, and most of us including me, for once were fairly happy with the outcome. Quizzed during the supper interval, the most tactful remarks I could come up with were Id be happy with either baritone as the winner and There was one outstanding accompanist. In the event, the baritone Id tipped as the winner previous to the concert did win, the baritone I felt had given the most characterful singing on the night shared the Meikle Prize (for a duo) and that accompanist won a share of both the Meikle and the pianists prize.

Any singer who reaches this final clearly has a career ahead. Both of those who made up the evenings first half are only 25, and both chose very challenging programmes: the mezzo-soprano Dorottya Lang, who came third, gave herself very high mountains to climb with a selection of Duparc, Schumann, Rorem, Bartk, Wolf, Poulenc and Barber (whew!). Only the Schumann and Barber gave hints of what she may become, with an already opulent tone and musicality: her diction needs work, as does her projection but we are still talking about great promise here, from so young a singer who has already begun to make her mark on the opera stage.

The tenor Stuart Jackson, who was placed second, has won many other Song competitions, and it showed in his confident stage manner. This is an operatic voice in which one could definitely hear a Lensky, and his ambitious selection of Liszts Pace non trovo did him no harm at all, the closing O Laura, per voi sealing the performance with a beautifully open tone. He has a sense of power in reserve in all he does, and it wont be any surprise if he is snapped up pretty soon by even the larger opera houses.

The first note I made about the baritone Jonathan McGovern was I like the pianist! This was not to imply that I did not care for the singing, but more a reflection of the exceptional quality of Timothy Ends playing: he won a share of both prizes open to accompanists, and has previously won the Gerald Moore award. How Moore would have loved Timothys delectably wry playing in The foggy, foggy dew and the panache of his nachspiel in Wolfs Abschied.

The singer was pretty good, too in fact I would have said he was the winner if it had not been for a certain lack of lightness in that Britten and insufficient incisiveness in French songs. His Wolf selection provided strong evidence that he is definitely someone whose career will be worth watching; these are extremely taxing songs in every way, yet this 25 year old managed to convince with them, as indeed he did with Ivor Gurneys superficially easier, but just as emotionally complex Epitaph in old mode. Jonathan shared the Meikle Prize with his accompanist, and rightly so.

The overall winner was the German baritone Dominik Kninger, at 29 older than the others and certainly more worldly-wise. His programme might be described as more comfortable than that of his fellow competitors, and there was a sense of being lulled into a post-Fischer-Dieskau haze with Adelaide and Oh! Quand je dors. The Liszt was very finely done, the crucial Rayonnera! and Sveillera! not quite as rapturous as HMV, but striking nonetheless. Both the Mahler and Korngold pieces were convincing, and although I did not find either his voice or his stage presence especially compelling, Im sure he has a busy career ahead.

The evening closed with touching speeches from John Gilhooly, Sir Ralph Kohn and Thomas Quasthoff, who was awarded the Wigmore Medal and spoke of the Hall as his second home a feeling no doubt soon to be shared by many of the young competitors.