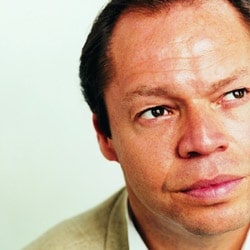 This concert was one of a series labelled ‘The Voice’ featuring Thomas Quasthoff, who most certainly has a great one, but is by no means the voice.

Although his Bach is up there with the best, it was disappointing to discover that Quasthoff is no Handelian.

Oddly, if you had not eschewed the obligatory standing ovation and made for the exit, you would have experienced the best part of the concert at the end, with the luminous encore in the shape of ‘Am Abend, Da Es Kühle War,’ with the almost hesitant violins of the Berliner Barock Solisten echoing the vocal line’s evocation of the evening hour; there are very few singers who can shape the line ‘O schöne Zeit! O Abendstunde!’ with such tenderness. The only frustrating part of this was that I, and probably many others, half expected him to launch into ‘Mache Dich, mein Herze, rein’ but that will have to wait for the full performance of the St Matthew Passion in April.

The aria ‘Ja, ja, ich kann die feinde schlagen’ from Selig ist der Mann got the evening’s singing off to a fine start: this kind of robust, masculine music is ideal for Quasthoff’s powerful bass-baritone. It seemed a pity not to give us the whole of Ich habe genug, confining that work to just the one recitative and ‘Ich freue mich auf meinen Tod,’ both crisply sung and played, as was Herr, so du willt, the line ‘Mein Jammer ist nunmehr gestillt’ delivered with touching definitiveness.

The second half of the concert was devoted to Handel, with excerpts from Messiah and Joshua, which were perhaps not the ideal choices. I would love to hear Quasthoff sing some of Handel’s other great bass arias ‘How willing my paternal love’ or ‘Revenge, Timotheus cries’ for example, where his grandeur of declamation and spaciousness of phrasing might better compensate for his less than ideal Handelian style.

It’s the Domingo syndrome, as I call it a great singer in one field forays into another, and some critics love him so much that they can’t say, for example, ‘His German is weak,’ so they say ‘His German is personal’ no doubt similarly hilarious things will be said of the Spanish tenor’s singing of Handel’s Bajazet. Well, Quasthoff’s English is personal, if you like, and he sings Caleb’s arias in a rather distant way. That encore had much to compensate for, and it did.