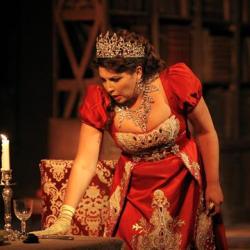 Until the advent of Peter Gelb as the new General Manager, a visit to the Metropolitan Opera guaranteed traditional production values and starry casts. His importing of the ENO-Anthony Minghella production of Madama Butterfly to open the season caused quite a stir, but the company was back on safe ground with a revival of their classic Franco Zeffirelli version of Puccini’s Tosca.

The indisposition of Andrea Gruber necessitated her replacement in the title role with Russian soprano Maria Guleghina, but whatever the behind-the-scenes troubles, this was a very sturdy, efficient and often moving performance.

Guleghina disappointed me last time she appeared as Tosca at Covent Garden, but here she was in her prime. Wearing the stunning Swarovski jewellery that was made for Maria Callas in 1956 and hasn’t been seen at the Met since, Guleghina emulated Callas’ magnetic stage presence rather convincingly. She interacted well with both of her co-stars, but more than anything, her singing was technically secure and emotionally engaged.

Making his role debut as Tosca’s lover Cavaradossi, José Cura seemed a bit shaky at times, but he warmed up considerably. His voice still possesses much of its beauty, and after a nervous first act perhaps caused by the late replacement of Gruber he portrayed the character with increasing conviction, though I found his singing of the Act 3 aria a little histrionic. The final duet with Tosca, though, was electrifying, and Cura’s behaviour at the curtain call was admirably modest, acknowledging Guleghina’s achievement in appearing at such short notice.

The highlight, though, was Act 2, largely due to the chemistry between the leading lady and Met favourite James Morris in the role of Scarpia, Chief of Police. Although his voice is rougher than it once was, Morris is the consummate actor and can still produce some thrilling tone when required. He was the ideal onstage audience to Guleghina’s tear-jerking performance of ‘Vissi d’arte’, his aggression and desire the perfect foil for her heartfelt pleas for the life of her lover.

Smaller roles were well-filled, too, with the ever-reliable Paul Plishka as a characterful Sacristan and Richard Vernon as a particularly excellent Sciarrone. The Met chorus was also in good voice in the brief Te Deum in Act 1.

The only major problem of the evening, and the one which reduced the performance from five stars to four, was the conductor Nicola Luisotti. Making his Met debut must have been nerve-wracking for the young Italian, and it showed in his hyperactive arm gestures and very odd tempi. Because of his lack of control, the orchestra started almost a bar too early in ‘Non la sospiri’; many arias were taken too fast whilst the more descriptive passages tended towards a leaden pace. On the other hand, there were some revelatory gestures; the big moments were more exciting than at Covent Garden in June 2006, and I loved his observance of the (fast) semiquaver rhythm in the closing bars of the opera. How will he perform in his double Royal Opera debut of Il trovatore and Madama Butterfly in early 2007? Time will tell, but I can’t help but wonder if it isn’t too much, too quickly for this young though clearly talented artist.

Nevertheless, this is one of the most gorgeous opera productions in the world, thanks to Zeffirelli’s realistic settings (which made me regret that the new Royal Opera production wasn’t more impressive). If you’re in New York, it’s definitely worth a try.