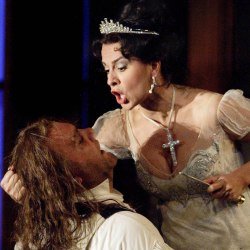 For over forty years, the Royal Opera clung to Franco Zeffirelli’s legendary production of Puccini’s Tosca like a leech.

It served such great figures as Placido Domingo, Gwyneth Jones, Shirley Verrett, Luciano Pavarotti and most especially, Maria Callas and Tito Gobbi, whose opening night performance when the production was new remains perhaps the single most famous night in the House’s history.

In its last revival, though, it was looking shabby, and times change.

So the company commissioned its first new production of the opera since 1964. It is modelled around the Romanian soprano Angela Gheorghiu, who was singing the entire role onstage for the first time.

The result is generally impressive. Considering how much it has to live up to, Jonathan Kent‘s new production is a winner. It ticks all the right boxes in terms of crowd-pleasing and revivability. I can quite happily predict it lasting as long as the Zeffirelli interpretation, as it’s every bit as solid, and what’s more, it has greater atmosphere and is directed with more detail.

Tosca‘s main themes of politics, religion and sexual violence are admirably focused in Kent’s formulation. Paul Brown‘s set for the first act has Cavaradossi painting in a small chapel at the front of the stage, with the altar raised up far above and behind him. Scarpia’s apartment is far more lavish in this production, with long windows down one side and a book-lined wall on the other. And the ramparts are gloomily cloudy, with the firing squad shooting at Cavaradossi from the back of the stage to the audience; Tosca’s famous leap really does feel like it’s in the nick of time.

However, Angela Gheorghiu didn’t always deliver the goods as Tosca. She was too timid in Act 1, despite looking as glamorous and sexy as ever. But more than this, her voice was curiously underpowered in the first two acts, particularly in the middle register where much of the vocal line lies. Polite applause greeted a bland performance of ‘Vissi d’arte’.

After this, however, she seemed to move into a higher gear. Rarely has the psychological tussle between Tosca and Scarpia in this scene been matched with such physical violence. The heroine stabs the evil Chief of Police, and he falls on her, dying slowly and bloodily. Gheorghiu held the audience captive in the final minutes of this act, and provided more vocal thrills and a fuller tone in the last act, but this was not quite the debut that one had hoped for.

The star was without question Marcelo Alvarez as the painter Cavaradossi. Ardent, passionate acting was matched with a voice in its prime. Both the big arias built in volume and intensity as they should, and Alvarez’s projection was impeccable. He portrayed love, torture and death with equal conviction, and brought the house down at the final curtain.

The other major performance came from Bryn Terfel as Scarpia, ever dependable as the evildoer. Through restraint, he conveyed a dangerous inner violence whose occasional physical enactment was always genuinely frightening. Terfel’s voice is ideal in this Italian repertoire, and I wish he would sing more of it: mammoth breath control and precise articulation make his Scarpia something out of the ordinary.

Carlo Cigni‘s brief appearance as Angelotti suggested that this might be a voice worth hearing again, and Young Artist Robert Gleadow was his usual characterful self. There was also an impressive appearance from Ben Lewis as the Shepherd Boy in Act 3, projecting more confidently than is often the case with this role.

They can keep reviving this production for four decades; if only it was possible to bottle Antonio Pappano‘s near-ideal conducting of a spirited ROH Orchestra and Chorus for the same amount of time! I was struck by the clarity of texture for most of the performance, Puccini being revealed as a much more imaginative orchestrator than he is usually given credit for. What his operas require more than anything is a flexible conductor who can move with the singers whilst maintaining a sense of direction: Pappano has this in spades.

The right combination of artists has come together at the right time: this Tosca is here to stay.