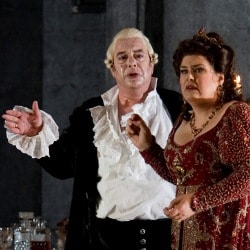 Puccini had composed four operas before taking his pen to Tosca, following the completion of La bohme which had been popularly but not always critically, well received.

Based on Victorien Sardou’s play La Tosca (1887), which Sarah Bernhardt had made famous in performances throughout Europe, Puccini explored the dark side of human emotion, a marked change from the late Romantic sentimentality of La bohme.

Tosca was premiered in 1900 in Rome, where it was set a century earlier, to a temperate critical reception.

In La bohme the villain was fate, represented by illness, and the characters had to accept it while moving towards an inevitable ending in which there is minimal action on stage. In Tosca both heroes and villains are humans and the violent struggle takes place, both literally and metaphorically, before our eyes. The driving forces of the melodrama are, for Tosca, jealousy to hold on to the love that she has, and for Scarpia envy and lust to grasp what he has not.

But whether for good or evil, there is a corrosive thread of lies, secrets and deception throughout the story in which all the characters indulge sooner or later to try to achieve their own ends.

Once described as a ‘shabby little shocker’, this is a story with a grim butcher’s bill (two suicides, one murder, death by firing squad and torture to boot). But it is filled with some of Puccini’s most lyrical music and exquisite duets and arias. This juxtaposition of gruesome situations and magnificent beauty makes the piece gripping, yet emotionally cathartic, as Puccini weaves a coherence between story and music with themes that recur in association with characters and concepts.

Welsh National Opera‘s production of Michael Blakemore‘s 1992 staging, revived by Benjamin Davis, is a classic treatment with no innovations or updating: it was pure, straightforward Tosca. The costumes and the three substantial sets designed by Ashley Martin-Davis echo the real Roman locations, statuesque and oppressive, atmospherically lit by Mark Henderson, and reflect those seen at its Roman premiere over a century ago. It remains focused on the unashamed melodrama of this maelstrom of passion, sexual blackmail and betrayal, and the music speaks a story utterly and unequivocally direct.

Australian soprano Deborah Riedel as Floria Tosca sings the title role with strength and presence and is every inch the fiery diva, jealous and passionate, yet moving in her feminine vulnerability. She has a huge voice and while there are some moments in which she may not produce the most beautiful sound, her show-stopping aria ‘Vissi d’arte’ is delivered with pathos.

On the night, Geraint Dodd substituted for the vastly experienced, but unfortunately indisposed, Dennis O’Neill as Tosca’s lover, Mario Cavaradossi. Dodd gave a whole-hearted performance, but he was not in the same league as either of the other two principals. Vocally, his clear, bright tenor sounded a couple of sizes too small for the role and the top sounded forced and spread. However he gained confidence during the performance and his heart-breaking aria ‘E lucevan le stelle’ was beautiful and moving.

Peter Sidhom as Scarpia fitted the part. From his dramatic entrance in Act One through a blindingly lit door into the gloom of the church, to his death rattle as he chokes on his own blood, this was a dramatically engrossing Scarpia, conveying all the vulture like menace, the cruelty and calculation, sadism and lust that the part requires. He sang it with sinister relentlessness, but vocally he was sometimes underpowered. However, the strength of the orchestral characterisation helped compensate.

Alan Fairs brings needed relieving humour to his jolly Sacristan, with Daniel Chadwick as the hunted Angelotti and Michael Clifton Thompson as Scarpia’s whipped-cur of an outrider, Spoletta.

With Julian Smith producing continuous swathes of sound conducting a rich, full and mellifluous handling of the score with great fervour, this was a Tosca that let rip and pulled no punches, musically delivering Puccini at his most emotional and manipulative best. A spirited and workmanlike theatrical performance not a cast to die for perhaps – but they all do, anyway.