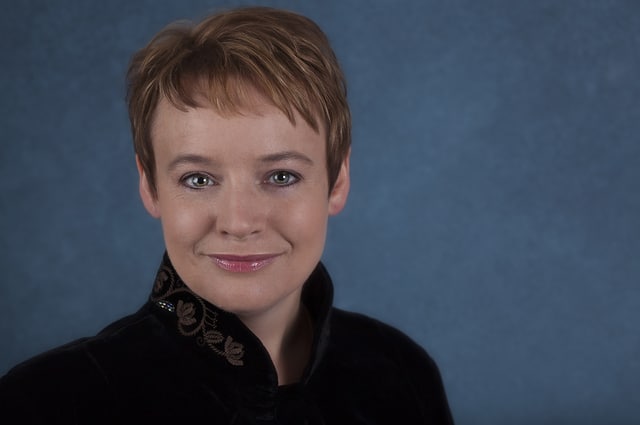 It is not often that one could describe Tristan und Isolde as being packed with ‘edge of your seat’, exhilarating thrills, but this concert staging at Grange Park Opera seems to have just that every time Rachel Nicholls opens her mouth. Despite having replaced Anja Kampe as Isolde at short notice, this established Wagnerian soprano who has Brünnhilde firmly under her belt instantly creates the impression that she is never going to put a foot wrong. Equally strong in all registers, her voice has a brilliantly piercing quality, and her performance feels totally polished precisely because of the exquisite attention to detail that she displays in every line. Phrases are begun with the right amount of power and then made fuller as they are followed through, while even the final syllables in lines are rounded off to perfection. She also proves a committed actor with her shoulder carriage in Act I suggesting a strong, proud person who, by the same token, finds her current situation so humiliating.

Bryan Register as Tristan has a pleasing and expansive tenor; when it really opens out it is possessed of a wide range of hues that give his powerful voice a certain air of lightness. Sometimes it feels as if he has to work up to producing such magnificent sounds and the only thing that puts his performance just a notch below Nicholls’ is that, while one feels that she could sing the whole thing all over again, the ways in which he (very understandably) paces himself are noticeable. He shines, however, in Act III when he can really give everything, and it is both his and Nicholls’ performances in Act II that give the occasion such a sense of thrill that the audience hangs on every note. Their performances are so engaging that, even though we know what is going to happen, we still whole-heartedly believe in the impending resolution of the chord, so that it comes as the greatest shock when the music is interrupted so abruptly.

Besides the two central performances, many other elements come together to make this Tristan if not perfect, then something very special. Although it is advertised as a concert performance, the orchestra remains in the pit and there are a few elements of staging. Two diagonal walls of wooden panels that meet at back of the stage create a backdrop, and these are coated in a thin paint so that they reflect the light shone onto them. A few props including the cup and a case of potions appear and the characters tend to occupy two benches set against the walls when they are not centre-stage. There are music stands, but different performers use their scores to varying degrees and Nicholls and Register never go near them.

This ‘production’ could not have reasonably been sold as fully staged, but as a concert staging it works very well as performers generally act to the full. The advantage is that they are not dogged by directorial interventions that do not fit comfortably with the scenario, and yet are all too common a feature of productions where directors feel they have to do something to introduce action. This Tristan also works well with its setting. The metaphorical temperature is high throughout as, for example, Act I sees Isolde ‘imprisoned’ on a ship with no hope of escape, and Act II sees her and Tristan’s passions come to the fore. The wooden walls bring a sense of enclosure while the intimate venue also helps us to believe that emotions are boiling over because it feels like a pressure cooker where there are no outlets for anything to escape.

Martyn Brabbins’ conducting of the Bournemouth Symphony Orchestra also contributes to the tone of the presentation. It is not the most spiritual rendering of the score, but in this tiny area there is immense opportunity to provide us with a very direct, visceral sound that complements the singers and the ‘staging’. Indeed, for all the power brought forth, Brabbins maintains balance across the orchestra because in a venue this small the sound can feel overwhelming without all efforts having to be focused on filling the space.

Mats Almgren, who has just finished singing Fafner and Hagen to great effect in Opera North’s Der Ring des Nibelungen, is an excellent King Marke. The question was could such a dark, gravelly bass that proved so perfect at capturing the malevolence of that pair transfer to this role? The answer is a resounding ‘yes’ because here his voice, while maintaining many of its unique attributes, also reveals greater degrees of subtlety and sensitivity as befitting the character. Almgren’s portrayal of Hagen felt so all-embracing that it is pleasing to see him capturing the very different personality of King Marke to virtually the same degree. If his portrayal here does not feel quite as polished this may only be because he is less familiar with the role, having only replaced Clive Bayley a few days ago and still being largely dependent on his score. Sara Fulgoni is a superb Brangäne with a rich and sumptuous mezzo-soprano, and Stephen Gadd a brilliant Kurwenal, asserting his strong baritone with power and assurance.

As is almost inevitable with a concert performance, given their aim to consume fewer resources including rehearsal time, there are some rough edges. Acting styles do not always feel congruent, and some aspects of the presentation could be better thought through. It is never easy to portray deaths in concert stagings but Opera North’s Der Ring des Nibelungen proved that it can be done effectively. Here, anyone unfamiliar with the story would struggle to work out that Melot and Kurwenal had actually died in Act III. Similarly, the crucial moment in which Tristan ensures he is wounded by Melot is not illustrated, which is a shame since directly afterwards all of the performers adopt stances that create a powerful closing tableau. It is also disappointing to have Brangäne sing ‘Einsam wachend in der Nacht’ from offstage as it rather destroys her communication to the audience. The lighting is generally effective although occasionally spotlights appear on principals at awkward moments when illumination beyond what is already there hardly seems necessary.

For every weak moment, however, there are many more strong ones and the close to Act I is particularly successful as the wooden walls part to reveal the brass players behind. As the men rush on, Tristan and Isolde look genuinely awkward because they feel the greatest passion for each other, know they cannot show this in front of everyone, and are still bemused to be finding themselves in this situation at all. Tristan und Isolde is the final work to be performed by Grange Park Opera in its current location before it moves to West Horsley Place next year, and it proves to be the most fitting of swansongs.