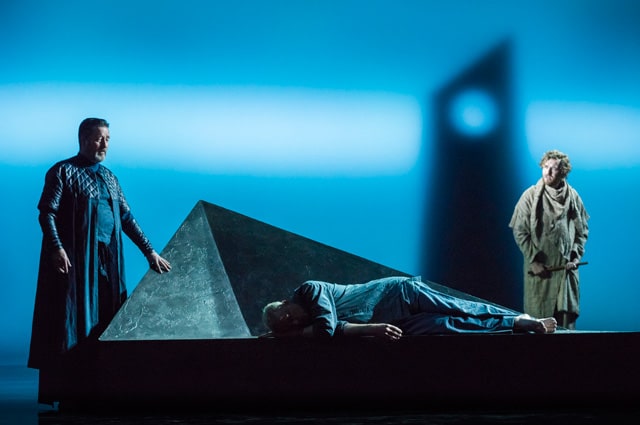 Tristan und Isolde is far more emotion than action driven, and this may explain why the simplicity of Carmen Jakobi’s staging for Longborough Festival Opera (first seen in 2015) actually aids its effectiveness. Although the stage may initially seem to contain little more than a few blocks, the approach allows all of the drama to be generated by the performers themselves, thus ensuring it arises naturally out of both the characters’ emotions and the music.

The result would be less effective if the soloists failed to convey the characters’ feelings so astutely, but Peter Wedd and Lee Bisset prove particularly effective in the title roles. As a result, in Act I we pick up on many details and sub-texts that might have not come to the fore in a more fussy staging. Bisset, through her immensely subtle and nuanced acting, proves just how strong and intelligent a person Isolde is, and consequently just how degrading it is for her to be made a virtual prisoner. It is also possible to see, however, that as she vents her frustration why she might simply be viewed by the sailors as the ‘wild Irish maid’.

Wedd, on the other hand, feels a far stiffer character at this point as he is ridden with guilt and hardly able to look Isolde in the eye. However, in this production it becomes easy to see how much shallower the two servants, Kurwenal and Brangäne, are than the main protagonists, even if both are immensely loyal and thus noble on their own terms. As Tristan in his shame fumbles for words to explain why he cannot see Isolde, Kurwenal simply delivers the ‘traditional’ line that Tristan is a hero who should not be ordered to do anything by Isolde. As Isolde laments her lot Brangäne replies that the fact she is to marry a King who has such a hero as his servant should make her happy.

As we see Isolde persuade Tristan to drink atonement, we become acutely aware of how he suddenly has to break off this encounter to give orders over steering the ship into port, highlighting the conflict between his public responsibilities and his private love and sense of duty towards Isolde. At the end of the act Bisset’s face as she tries to hide the joy she feels in front of the crowd, while really wanting to shout of her love to the world, is nigh on perfect. 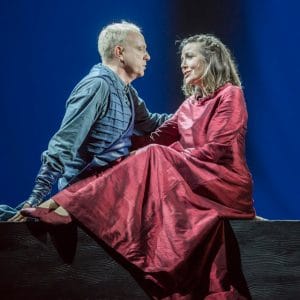 A backdrop changes colour throughout the evening according to the mood. Silhouetted figures can appear behind it and sometimes it rises to reveal characters or a different realm. For example, in Act I when Brangäne goes from Isolde’s to Tristan’s quarters on the ship it rises partially to reveal Tristan and Kurwenal. For one of the sailors’ cries the crew appear as shadows behind the backdrop as if emphasising how society is closing in menacingly on Isolde.

Act II, which does not feature the dancers who appeared in 2015, is staged very effectively as the gestures of the two main protagonists keep the emotions flowing, with their plentiful, but sensitive, physical contact being tempered by moments when they stand apart. It is a shame, however, that Brangäne sings ‘Einsam wachend in der Nacht’ from offstage, when she could easily have been placed in the balcony just to the right of it, as it rather destroys her ability to communicate the piece to the audience. In addition, because her warning acts as a counterpoint to Tristan and Isolde’s own words it needs to be the focus or our attention rather the ‘background music’ to Tristan and Isolde’s increasingly amorous actions. However, the manner in which the impending resolution of the chord is interrupted is good as within a second the backdrop has risen to reveal Marke, Melot and others, thus showing how suddenly and completely night has become day.

As well as proving the most engaging and subtle of actors, Lee Bisset is vocally brilliant, with a soprano that can display sensitivity, restraint, strength and power while still always achieving a sense of overarching unity. Peter Wedd frequently conveys a strong sound that feels both forthright and yet nuanced. If he is not quite as consistently strong across the evening as a whole his performance in Act III when both his voice and overall persona convey total anguish and despair is immensely persuasive.

Stuart Pendred is excellent as Kurwenal, revealing both strength and a certain warmth to his sound. Harriet Williams displays a full and assertive mezzo-soprano as Brangäne, and Geoffrey Moses’ demeanour as the broken King Marke is highly convincing. Anthony Negus’ conducting is immensely accomplished as he elicits the right senses of texture and flow from the orchestra while also ensuring that all lines are delineated well and a strong balance across the orchestra maintained.

Longborough Festival Opera’s 2017 season continues until 1 August, with one further performance of Orfeo ed Euridice taking place in London on 4 August. For details of all events read our preview.