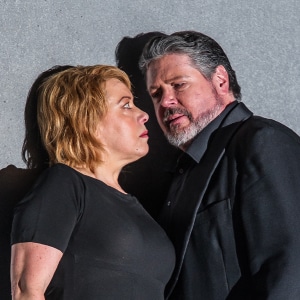 The first revival of Christof Loy’s 2009 production of Tristan und Isolde is superbly sung and played, and if the staging has one or two problematic elements there is still much to enjoy. Johannes Leiacker’s set is divided into two sections, with a large box-like area sporting monochrome colours and virtually no furnishings standing to the fore. Behind this is a region decked out like a plush dining area that would look at home on land or an early cruise ship. The meaning behind the staging seems clear enough. The area at the back constitutes King Marke’s realm and hence society, and the zone at the front, which Tristan and Isolde occupy virtually the entire time, represents their attempts to break free from it.

The difficulty is that although the staging makes sense from an intellectual viewpoint, it does not take us with it at every turn. Although one can argue that the society from which Wagner saw Tristan and Isolde attempting to escape was the nineteenth century one he saw all around him, placing half of the drama there still amounts to an interpretation of his work. It would be one thing to have two sets that contrasted the original setting with this Bourgeois world, and it would be equally straightforward to have Tristan and Isolde’s realm standing alongside the original setting. To make one leap, however, to the nineteenth century and then another to the monochrome ‘realm of night’ is a bridge too far. In the absence of any reference to the original context, we lose sense of what these areas are standing in contrast to, which would seem rather important.

Visually, however, the staging has much merit, aided handsomely by Olaf Winter’s lighting designs. The main area is lit from the front and back along diagonals that cast long shadows of the figures, and this proves highly effective. With so much of Tristan und Isolde involving just a few people, it is easy for them to become swamped on the Royal Opera House stage. The shadows help to alleviate this by creating larger versions of them and magnifying out their gestures, without making the visual effects feel gaudy or distracting.

While the lighting is highly successful, various other embellishments are more problematic. Because Tristan und Isolde moves at a slow pace, the moments of high drama it does possess really need to count, and too often they miss the mark. For example, in Act II Melot and King Marke’s bursting in on the lovers should be a moment that stuns us with its abruptness, because as far as we are concerned we are about to hear a chord resolved. Unfortunately, the effect is marred by having Melot sit on stage eyeing up the pair before Kurwenal appears to warn them, which alerts us to the fact that something is about to happen. Clearly, Loy is intending to make a point with this choice of staging, but such an abrupt interruption has to be portrayed literally in order to have the desired effect.

Oddly, though not altogether inexplicably, Brangäne sings ‘Einsam wachend in der Nacht’ while being groped by Kurwenal, as Loy appears to imply that she, like Isolde, transforms into a ‘creature of the night’. In Act II she changes into black, as Isolde has already done, but in her case the transformation remains incomplete. With her final warning to the lovers that day is on the way Kurwenal leaves, suggesting that she will not go beyond certain limits because she recognises the need to return from the edge.

Musically, the evening is exceptional. Nina Stemme must surely stand as one of the great Isoldes of our time, and puts in a stunning performance as she delivers each line with warmth and clarity. Her phrasing is impeccable, and she tackles the most soaring passages with a smoothness that sees the greatest heights scaled with apparent ease, but which never prevents the output from feeling exciting. Stephen Gould’s Tristan is equally impressive, although in different ways, as his voice proves brilliantly striking and expansive. Occasionally their duets feel just a little abrasive, perhaps because both possess such powerful instruments, but overall their voices blend well, and this is a Tristan and Isolde partnership worth going to considerable lengths to experience.

On opening night, John Tomlinson’s voice felt a little shaky and unfocused as he sang King Marke. Iain Paterson, on the other hand, may never have sung better as he gives a brilliant performance as Kurwenal, while Sarah Connolly is a sumptuous-toned Brangäne. Even the minor characters are cast from strength with Ed Lyon as the Sailor, Neal Cooper as Melot, Graham Clark as the Shepherd and Jette Parker Young Artist Yuriy Yurchuk as the Steersman all providing tremendous support.

This must also rank of one of Antonio Pappano’s finest hours as he conducts with such finesse, accuracy and sensitivity. Occasionally during the Prelude it seems as if his meticulous approach might just be to the detriment of capturing certain qualities of fluidity in the phrasing, but any fears one might have on this score are very soon allayed. He manages the surges and recessions within the Liebestod with spellbinding fervour, and the orchestra’s performance is another decisive factor in ensuring that this is a Tristan und Isolde to savour.

The Royal Opera’s Tristan und Isolde will be broadcast on BBC Radio 3 on 29 December from 5.45pm.