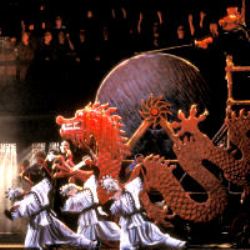 Andrei Serban‘s production of Puccini’s Turandot is one of the jewels of the Royal Opera’s repertoire.

Twenty-two years after it was first given at the Los Angeles Olympics, it remains a grand spectacle and a great show, with Sally Jacobs‘s opulent designs and F. Mitchell Dana‘s atmospheric lighting.

And in its most ambitious outreach project to date, the Royal Opera broadcast the performance on big screens in the open air around the country, including Lake Windermere for the first time, to an estimated audience of 25,000 people.

Before the show, the Royal Opera’s Assistant Chorus Master Stephen Westrop led the audience in the Covent Garden Piazza in singing Nessun dorma, with help from three tenors from the Royal Opera Chorus, Elliot Goldie, Luke Price and Andrew H. Sinclair, to which the audience seemed to respond with enthusiasm.

For all its popularity, Turandot is in many ways a strange creation on Puccini’s part. At times it feels more like a pageant than a conventional opera, but rather than try to obscure this aspect, Serban’s production revels in it. The enormous red ribbons at the beginning, the grand, multi-tiered main set that houses the macabre chorus, and the dramatic masks: all these still look as vibrant as ever, suggesting that we’ll be seeing another 22 years of the production. The direction is unfussy, perhaps occasionally lacking emphasis for the main characters, but there are nice touches, such as wheeling the dead body of Li across the stage after the union of Turandot and Calaf at the end.

It’s a shocking moment that switches the closing emphasis onto the slave girl, who has died for her love for Calaf – and as it happens, Li had already stolen the show, thanks to the radiant singing of Greek soprano Elena Kelessidi. Tu, che di gel and particularly Signore ascolta showed her voice in prime condition, with a secure top, and she performed with great pathos.

Having tenor Ben Heppner in the role of Calaf is somewhat of a treat, considering that he has only sung it once before (ten years ago in Chicago). He attacked the notes with power and force, taking a while to warm up in Act 1 but doing a good job of conveying the mental strain of the Riddle Scene. Let’s face it: the tenor’s success in this opera depends on how well he sings Nessun dorma, and Heppner rose to the challenge with panache. I also thought that there was an absence of the strain and cracked notes that had bothered some people (though not me) in last year’s Otello.

The title role is more problematic. Georgina Lukcs is an impressive figure on stage, and some of her top notes are remarkably powerful. She’s also better looking than many sopranos in the part. However, when something more melodic is called for In questa reggia or the closing duet, for instance she wobbles about the tone without a clear sense of phrasing. It’s nevertheless a good stab at an impossible character, who to me is psychologically inconsistent over the course of the opera.

Senior Artist Robert Lloyd returned to the role of Timur, Calaf’s father, for the seventh time since the production’s 1984 premiere, and was as vivid an actor as ever. A special mention is deserved by Francis Egerton, whose portrayal of the Emperor Altoum marks his last appearance with the company, after over 35 consecutive seasons and 750 performances in a range of roles. His characterful contributions will be sorely missed by ROH regulars.

It was also good to see Robbin Leggate back as Pang, with Ping played by Jorge Lagunes and Alasdair Elliott singing Pong. Vocally strong though they were, however, they could not overcome the excessive length and dramatic stasis of the opening of Act 2, which is the opera’s weak spot.

It was a strong night for both chorus and orchestra, who provided the dramatic canvas for the work under the expert direction of Hungarian conductor Stefan Soltesz.

In all, despite some rough edges and occasional longueurs, this is an efficient revival of a Royal Opera classic.