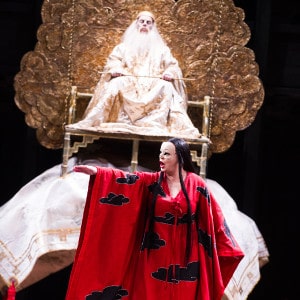 Now thirty years old, and on its second outing in the Royal Opera’s 2013/14 season, Andrei Serban’s Turandot might be described as traditional in style. That, however, is no slur against it as it proves an excellent vehicle for delineating all of the highs and lows, as well as tensions and horrors, in the plot. When, as here, such a strong production is complemented by truly exceptional musicianship the result is something very special.

The production is highly dynamic with Kate Flatt’s Chinese inspired choreography seeing masked dancers frequently grace the stage. At the start, however, things almost become too much. When Timur first staggers on our attention is diverted from connecting with his frailty by witnessing the guards pushing back the crowd, and everything risks feeling overblown.

This is not, however, a problem that persists. Indeed, it soon becomes noticeable that what flashes of brightness there are all occur against a muted backdrop. The ordinary city dwellers are dressed in grey and brown, while the tiered, semi-circular gallery that surrounds the stage is similarly dark in tone. By creating an arena for the action, complete with spectators, it highlights the repressive nature of the set-up.

The production also does much to keep the emotional colour wheel turning. A macabre grandeur is brought to the execution of the Prince of Persia, and culminates in Calaf’s first sighting of Turandot. Suddenly, however, Ping, Pang and Pong (Grant Doyle, David Butt Philip and Luis Gomes in fine vocal shape) introduce some lighter relief with their acrobatic warnings to Calaf to turn away, before the appearance of the women returns us to the theme of Turandot’s allure. F. Mitchell Dana’s lighting is also highly atmospheric, shining mysteriously through the gallery’s latticed windows.

Despite the production’s strengths, the experience would fail to be as captivating if the singing and acting were not as good as they are. Iréne Theorin perfectly captures Turandot’s icy allure, and her voice is possessed of a directness and vibrancy that pierces the heart just as much as it chills the bones. As Calaf, Alfred Kim’s phrasing is not quite as masterly but the expansiveness of his voice is remarkable , and there is little that could match the sheer visceral thrill of his ‘Nessun dorma’.

In this way, the riddles scene creates the most brilliant confrontation between the two. That both performers are singing at the height of their game creates the sense that this is a battle of wits and wills in which neither character is giving any quarter. Ailyn Pérez as Liù displays a voice of mesmerising beauty and makes parts of ‘Signore, ascolta’ so hushed that we feel her emotion as a single strain of sound passing tentatively through the air. Matthew Rose with his resonant bass is a dignified and highly human Timur, while Nicola Luisotti conducts with a sense of purpose while maintaining balance, sensitivity and a touch of the oriental in his sound.

Amidst the final rejoicings Timur leads the chariot carrying the body of Liù across the stage in a deeply moving gesture that says so much more about the production’s strengths. Turandot is a highly unsympathetic character who uses a thousand year old wrong to justify death to numerous people who were never responsible for the original evil. In opera, however, we do not always want to be left thinking like this, and need some space to feel for the central heroes, and to rejoice in their achievements and personal transformations.

This production enables us to do exactly that, but makes the experience more multi-layered by not completely neglecting the horrors. As we see the expression on Rose’s face we know that Timur’s love for Liù is not the same as Calaf’s for Turandot or Liu’s for Calaf, for which no price is too high to pay. Rather it is the deep affection that a master would have for a servant who had been so loyal. Nothing could feel more human, or be more inclined to see us shed a final tear of sorrow.