Barry Creasy joins the celebration of St Patrick’s Day in songs with Irish connections at the Wigmore. 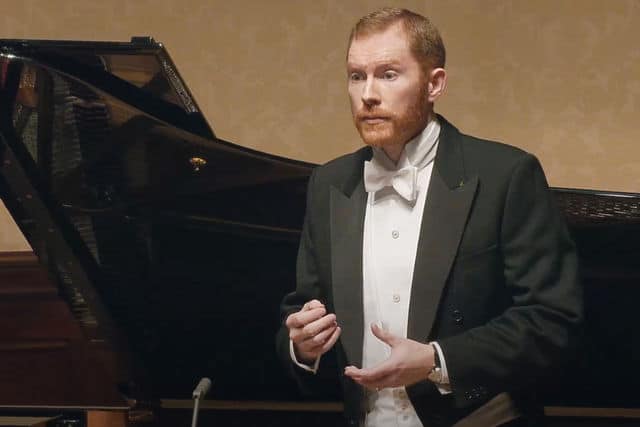 With John Gilhooly at the helm, there was no doubt that, whatever the limitations placed on music-making by the pandemic, the Wigmore Hall would not allow St Patrick’s Day to pass unmarked, and Wednesday evening’s well planned and well executed streamed concert delivered an evening’s entertainment laced with the melodrama, humour and charm that one would expect from the land of the poet and the dreamer.

Soprano Ailish Tynan and tenor Robin Tritschler assigned honorary Irish status to their accompanist James Baillieu and presented a medley of songs – all with Irish connections – that covered every base. Beginning with the restrained camp of ‘Believe me, if all those endearing young charms’, the programme included many delights, including the astringent, almost-recitative of Rebecca Clarke’s setting of Yeats’ ‘A dream’, Samuel Barber’s quirky ‘Nuvoletta’ – a setting of Joyce’s even quirkier text from Finnegan’s Wake – the jolly jig of ‘Tigaree torum orum’, and the outrageously saccharine ‘When other lips and other hearts’ and ‘I dreamt I dwelt in marble halls’ from Balfe’s The Bohemian Girl. Although there was contrast a-plenty in the material, this was definitely an evening of parlour entertainment: nothing was overblown, and even Tynan’s occasional coloratura moments were presented with a knowing wink.

Tynan and Tritschler’s voices matched perfectly for their duet work in ‘Believe me…’, ‘Londonderry Air’ and ‘Home, Sweet, Home’, but it was enjoyable also to observe the contrast in their stage presences. Tritschler’s fortes are Schubert and Britten, and his approach to his material, although expressive, always tended to the serious, which absolutely suited Britten’s settings of ‘Down by the Salley Gardens’ and ‘Sail on, sail on’, or Bridge’s lyrical, almost operatic ‘Goldenhair’. Tritschler’s longest set – the ten songs of Barber’s Op. 29 Hermit Songs – suited his lyric tenor voice perfectly, and the poems and scribblings of mediaeval Irish monks were addressed with a cloistered restraint and with pastel contrasts: the admonitory ‘At St Patrick’s Purgatory’; the uneasy ‘Saint Ita’s Vision’; the forlorn ‘The Crucifixion’, the cosy ‘The monk and his cat’ and the graffiti-taunting (lucky old Edan!) ‘Promiscuity’.

Tynan, as always, inhabited the emotion of her songs and transmitted it to the audience with élan. Her performance of the almost-Renaissance melody of Edmund Pendleton’s ‘Bid adieu’ was utterly moving, as was her ability to become both the dream and the dreamer in Britten’s ‘Oft in the Stilly Night’; she imbued Muriel Herbert’s ‘The Lake Isle of Innisfree’ with the sense of yearning for solitude that Yeats’ poem requires (and how welcome it was to hear a song by Herbert, an English pastoralist whose works are so often eclipsed by those of her male contemporaries). For her own longer set – nine traditional Irish songs arranged by Herbert Hughes – Tynan allowed her nationality to come shining through: the jolly tune and ‘whack for the toora loora lady’ of ‘The Spanish Lady’ was earthy; ‘Reynardine’ was given a gossamer, fairy tale quality; quiet sorrow infused ‘I will walk with my love’; in ‘The Old Turf Fire’ you could sense folded arms and a kettle on the range, and the bitter sorrow of a soldier’s girl left behind was almost palpable in ‘Johnny, I hardly knew ye’.

As ever, James Baillieu was the perfect accompanist. The subtle brilliance of the tiptoeing accompaniment to Thomas Dunhill’s ‘The Cloths of Heaven’, the kitten-on-the-keys appoggiaturas against the warm Berceuse in ‘The monk and his Cat’, the brittle waltzes in ‘Nuvoletta’ and ‘Oft in the Stilly Night’, the tolling ostinato in ‘The desire for Hermitage’, and the rich chromaticism of the Balfe numbers, all demonstrated a consummate understanding of the idioms.

The concert is available on the Wigmore Hall website